Later I started doing minor changes to the recipe because this was a favourite and sabudana or sago pearls aren’t the healthiest of ingredients even though they are are neutral, considered cooling and Ayurveda approves it for cooling properties as well as to support lactation etc. Do check out the fortified, low glycemic sabudana khichdi I have shared earlier.

Nevertheless, my quest for a good substitute for sabudana was on and I didn’t realise the solution was just under my nose all this while. 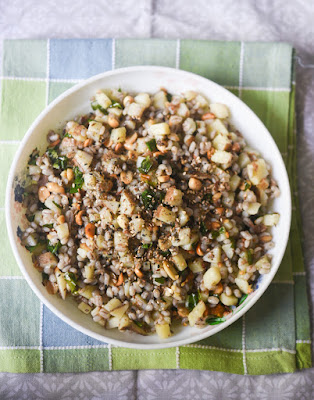 I have been using barley in many forms ever since I started my own kitchen. This blog has barley recipes since the early days I started sharing recipes and you will find pearl barley in the form of pasta, risotto, soup, khichdi and herbed pearl barley etc.

Once pearl barley came to my mind as a substitute for sabudana I started planning about how to bring the texture close to cooked sabudana because that’s what makes sabudana khichdi unique.

In fact the taste, texture and properties of sabudana are quite in tune with pearl barley, the later being much more nutritious and low glycemic carb, something that suits us in present day almost sedentary lifestyle.

Note that pear barley and barley in other forms is considered cooling, pitta pacifying, gut healing and anti flatulent so it is the best grains to include in summers. Those who drink a mug of jau ki ghaat or barley water everyday will never be troubled by the excessive heat in the body or the ailments caused by summer heat.

With the addition pf potatoes with skin and pink salt in this recipe, it becomes good for hypertensive people as well.

I found a way to use pearl barley that works for me and I and sharing that method in the recipe. If you make barley water regularly by boiling pearl barley and straining the starchy water, you can use the leftover barley pearls in the recipe after draining it really well. If you have access to barley couscous, you might want to use that but I prefer pearl barley any day.

Proceed to do the tadka and finish the pearl barley khichdi.

To make the tadka, heat the ghee in a wide pan and add the ingredients listed in tadka list one by one and let them get aromatic. Once everything sizzles, dump the steamed potatoes and pearl barley in the pan and mix really well. Add all the finishing ingredients and give it a good mix while the pan is still on stove. Once everything is mixed, adjust seasoning and serve hot. By this time you will get the aroma so characteristic of sabudana khichdi and that makes this recipe such a hit in my opinion.

This pearl barley khichdi tastes good even when it is slightly cold. 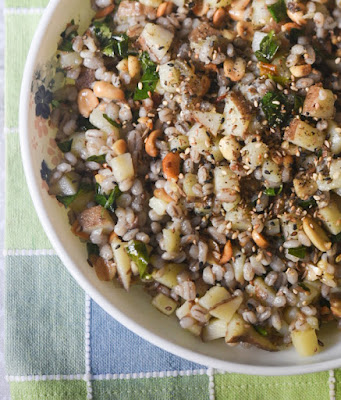 Pearl barley khichdi is a little more filling than sabudana khichdi and is a perfectly balanced meal so make it for a breakfast that starts your day at a delicious note and keep you energetic through the day or make it a meal any time time of the day.

If you want to make sabudana vada with the same kind of replacement, do try broken barley or barley daliya that’s easily available in the market. Use boiled and mashed potatoes, soaked barley daliya and proceed to make the vadas just like you would do for sabudana vada. I will post the recipe next because we did a trial and it was very encouraging.

Enjoy pearl barley khichdi to replace sabudana khichdi once and you would know what’s your favourite now.