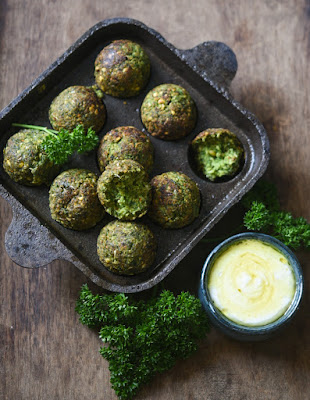 I love falafels and have been making them with soaked chickpeas and loads of herbs in it, the Isaraeli version that seems to be more popular. I never cared much about what herbs I used while making falafels because I would just add whatever was growing in the garden, falafels actually had become a recipe that would become a quick meal along with a dip and a salad on the side. In fact my Delhi garden used to have at least 4-5 types of herbs growing at any time of the year and I would just mix and match to make quick falafels, sometimes flattened like a burger patty and sometimes like our small pakodas, always shallow fried.

Only once I tried the Egyptian style falafels with a small batch of dried skinned fava beans that was shared by someone. I saved some to make halwa that was made traditionally in my family and made that too just once, saving a little bit of dry split fava beans like a true hoarder. 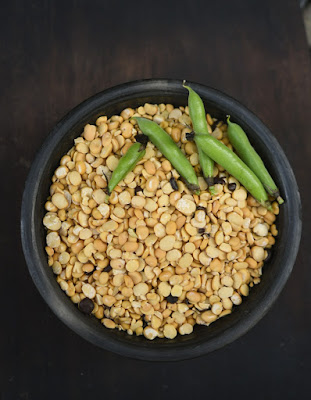 In the meanwhile I had this dream of growing some fava beans and when I saw seeds in the local market here in Dehradun few months ago, I just bought a few packets and sowed some hope of fava beans in the front garden as I had seen the pictures of its beautiful flowers. To my utter dismay an army of monkeys trampled over the young saplings and ate the growlingshoots. I tried to rescue about ten plants, they responded by shooting out new branches that grew with a bit of support. The fava beans plants are quite sturdy and straight, growing upto 3-4 feet tall if not disturbed.

Few travels happened in between and I kept seeing the plants surviving, flowering and ready to bear some beans. It was last month when I was away for a month long teaching assignment at NID Vijaywada and when the institute was shut because COVID-19 was declared a pandemic and a public health emergency, I had to come back home unexpectedly and my travel back home was such that I had to quarantine myself for 14 days. I decided to work in the garden during my quarantine because there was no human contact while doing so. The fava beans plants were ready to bring the bounty during this time, making my quarantine a lot more bearable.

Some flowers came on each node and then the pods swelled up, giving me two harvests of about 20-30 pods at a time. Since Arvind was cooking with his limited skills and interest in the kitchen, I asked him to just add those fava beans to alu baingan subzi once and to just boil them like edemame beans next. I love the fava beans subzi made with fresh pods that we call bakla ki subzi but that wasn’t something he could make on his own.

I turned to my Instagram followers for suggestions regarding fava beans recipe when I harvested the third batch after my quarantine was over and that’s when a friend Anoop Chand suggested falafels.

I must add that I felt my quarantine time was not at all lonely because of my social media interactions and a little bit of sewing, embroidery and crochet I did on a dress I made during that time. When the world seems to be going topsy turvy, a little crafty handwork gives a sense of control and calms the mind. Have you ever tried crafting during the times of distress? Try that and let me know.

After seeing Anoop’s suggestion I knew it was the time to cook falafels with freshly harvested fava beans now, more so because there was a lot of parsley and some coriander leaves growing in the garden too. This was the best falafel out of the three versions I had tried till date, the Israeli chickpea based falafels, the Egyptian dry split fava beans based falafels and this version of green falafels made with fresh fava bean pods that will be repeated whenever I have fresh fava bean pods on hand.

Here is the recipe, simple and yet spectacular in looks and flavours. I used a paniyaram pan to fry falafels and it didn’t disappoint.

Preparation
Pour ½ tsp oil in each slot of the paniyaram pan and heat it over low flame.
In the meanwhile, place all the ingredients in a mixie jar and pulse to make a coarse paste without adding any water.

Empty the paste in a mixing bowl, adjust seasoning and divide in 9 portions. It was 9 portions for me because the pan has 9 slots, you can make smaller or bigger portions if you using other kind of pans. Cast iron pan is highly recommended for such shallow frying because you get a crisp crust with very little oil used.

Make smooth balls with the mixture, without pressing it too hard to avoid getting the falafels dense and hard. A light handed approach while shaping them is the best.

Once the pan is hot enough, slip the round shaped falafels in each slot and crank up the heat. Use a pointed knife to ease out the falafels from the round slots and turn them to cook from all sides till they are crisp and cooked through. You may need to drizzle a little more oil while it cooks. Take the falafels out of the pan with a pair of chopsticks or any suitable tool you have.

I have not added onions to this recipe because there is a lot of chopped curly leaf parsley that gives it a nice fluffy character. Chopped onions would have made it crumbly if I didn’t add some binding agent like besan and that would have changed the flavour.

Serve hot with a garlic based dip. I always end up making toum style dip for falafels and here is a quick recip that’s ot perfectly emulsified like the original version but very delicious to pair with these. 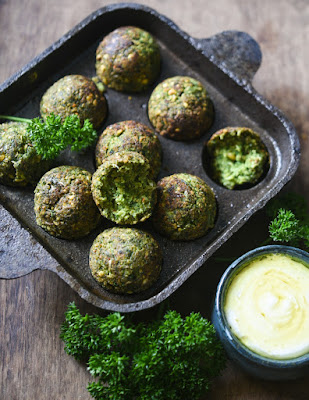 To make the toum style dip, I mince 12-15 garlic cloves very fine and leave them on the board for 10 minutes so they get sharper on exposure to air. Now whisk it with ½ cup hung curd, 2 tbsp olive oil and 1 tsp salt. Serve as required.

Fava beans are rich in L-dopa, a compound that helps nerve activity and fava beans have been found to be great from the treatment of Parkinson’s disease. I have written more about this in in an earlier post about Fava beans, please go check that out to find one more fava beans recipe and its goodness.

Good proteins are also the key to maintain a robust immunity and remember we need it a lot more right now.

Take care everyone. Eat well and keep your mind calm in this difficult time. We will sail through this and the suffering will be a lesson for the years to come.
Labels: bakla chickpeas falafels fava beans for diabetics gluten free healthy snacks heart healthy herbs quick healthy snack raitas/dips