Besan ka cheela is such a simple recipe why should I be writing about it?

I have already shared numerous recipes of lentil fritters or cakes, a cauliflower roesti almost like a cheela, and even buckwheat savoury pancakes and besan ka cheela should be common sense. This is what I thought and never posted a basic besan ka cheela recipe because it was too mundane. 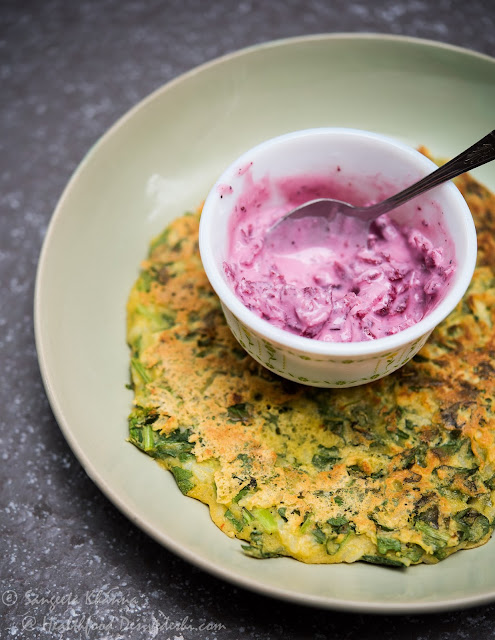 But recently when I mentioned besan ka cheela to someone she thought it is an elaborate recipe and she can't manage with her work routine. She was smiling wide when I told her how simple it is and she can do it almost in the same time it takes to toast her breads slices.

Sometimes we don't realise how simpler recipes are being forgotten just because there are so many convenient choices in the modern world. Bread and cereal has become the homogeneous breakfast all over the world almost and we miss a chance to eat seasonal produce. Some people include fruits or fruit juices but no one thinks about vegetables being part of the breakfast. There are few traditional home kitchens where mooli ka paratha or gobhi ka paratha is made but working couples or nuclear families hardly get to make parathas for breakfast.

I know I get repetitive but I still find people who just cannot cook a breakfast not because they can't spare 10 minutes extra but they just don't know what to do. There has been a generation that has lost touch with cooking food at home. The simpler recipes here are for them.

Besan ka cheela is an everyday savoury pancake or crepe from north India, mostly made for breakfast. But a cheela is so versatile that it is used in many many ways. It can be rolled inside a thin roti to make a nice vegetarian kathi roll, smaller besan ka cheela can be served with Chai and rolled up besan ka cheela can even be curried. There are so many traditional variations of this recipe that it is a testimony in it's own about how people loved it and that it has nourished many generations.

The recipe I am sharing is basic, the tricks I am going to tell will make it a quick breakfast for you.

You must make some kanji and keep the pickled beets or carrots from it in the fridge so you can keep using it for quick meals like this yogurt dip that I made with pickled beets. Making kanji with grated beets makes it so much better. 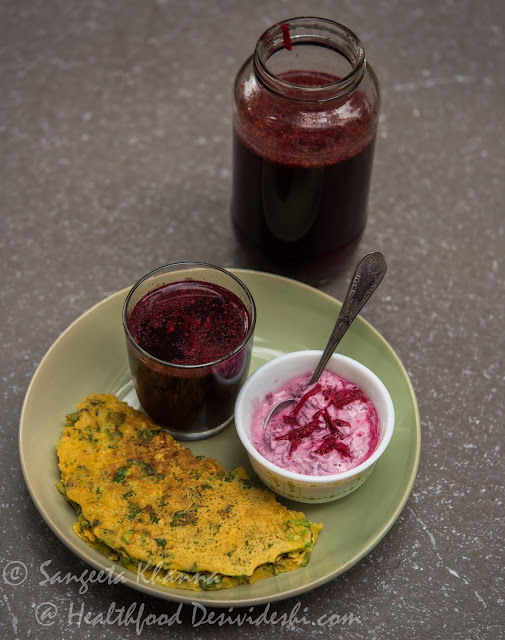 Mix everything together the previous night and refrigerate. 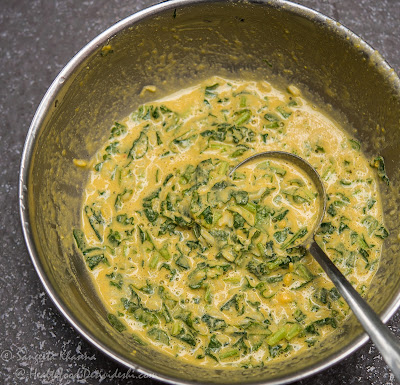 Heat a frying pan and grease it with 1/2 tsp ghee about 10 minutes before your breakfast time. It is okay if you have to go for a morning chore in between. Watering the garden, preparing for your bath or organising fruits for the day can be done while the cheela cooks.

Pour half the batter into the pan, lower the flame to minimum and cover it. After about 6-8 minutes you have to flip the cheela and cook on the other side for 2 more minutes, drizzling some ghee on the other side too.

For making 2 cheelas in the same time you can use 2 frying pans simultaneously on two burners. Isn't that quick and easy to do?

To make the yogurt and pickled beets dip just fish out a heaped spoon of the pickled beets from the kanji and mix with half a cup of thick yogurt, adjust seasoning and enjoy. 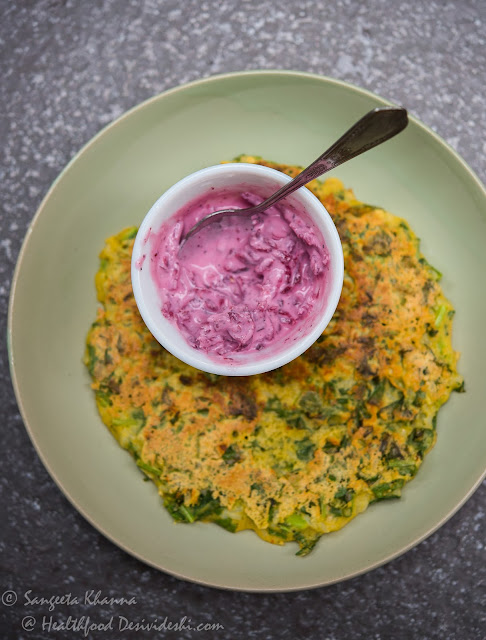 If you have some extra time in the previous evening you can soak some lentils for 2 hours, blend to make paste and make the batter using that lentils paste, those lentil cheelas are tastier and have more nutrient efficiency because you remove phytates when you soak lentils.

Note that besan ka cheela is a far better breakfast than toast, cereal or oatmeal porridge and you can have the besan ka cheela along with eggs too if you wish. And that can also be made easy, just break an egg over the cheela before you cover it and find it cooked when you return to claim it for your breakfast.