Arugula and Rucola both are different types of rocket or roquette leaves used as salad greens. Both types of rocket are very flavourful and add a punch to any salad or any meal. Known as super foods, these greens belong to mustard family and are packed with antioxidants and vitamins. See more information here.

Rocket leaves have an ORAC value of about 1904µmol per gram. ORAC is Oxygen radical absorbance capacity, a measure of how potent the antioxidant is. Both types of rocket leaves, the arugula and rucola are a rich source of Vitamins A and C, polyphenols and carotenoids etc. Calcium and phosphorus, magnesium and a few more minerals are found in good quantity.

The taste and aroma of both these types of rockets is very different. Arugula is peppery and sharp while rucola is more aromatic and only a hint of peppery taste which is more complex than arugula.

There was a curiosity about my fragrant rucola leaves when I posted the peach and feta salad with rucola few days ago. Many friends were curious about rucola as they had always seen arugula and rucola being named interchangeably in US, and India both. A friend from Europe also said the same. That is when I decided to differentiate between the two so the confusion is over.

Luckily I had clicked a few pictures of both the rockets growing in my garden, arugula has already flowered and completed it's life cycle, just like the annual brassica family plants do. But Rucola is surviving well in summers and sprouting new leaves like perennials, although rucola belongs to the same family too. 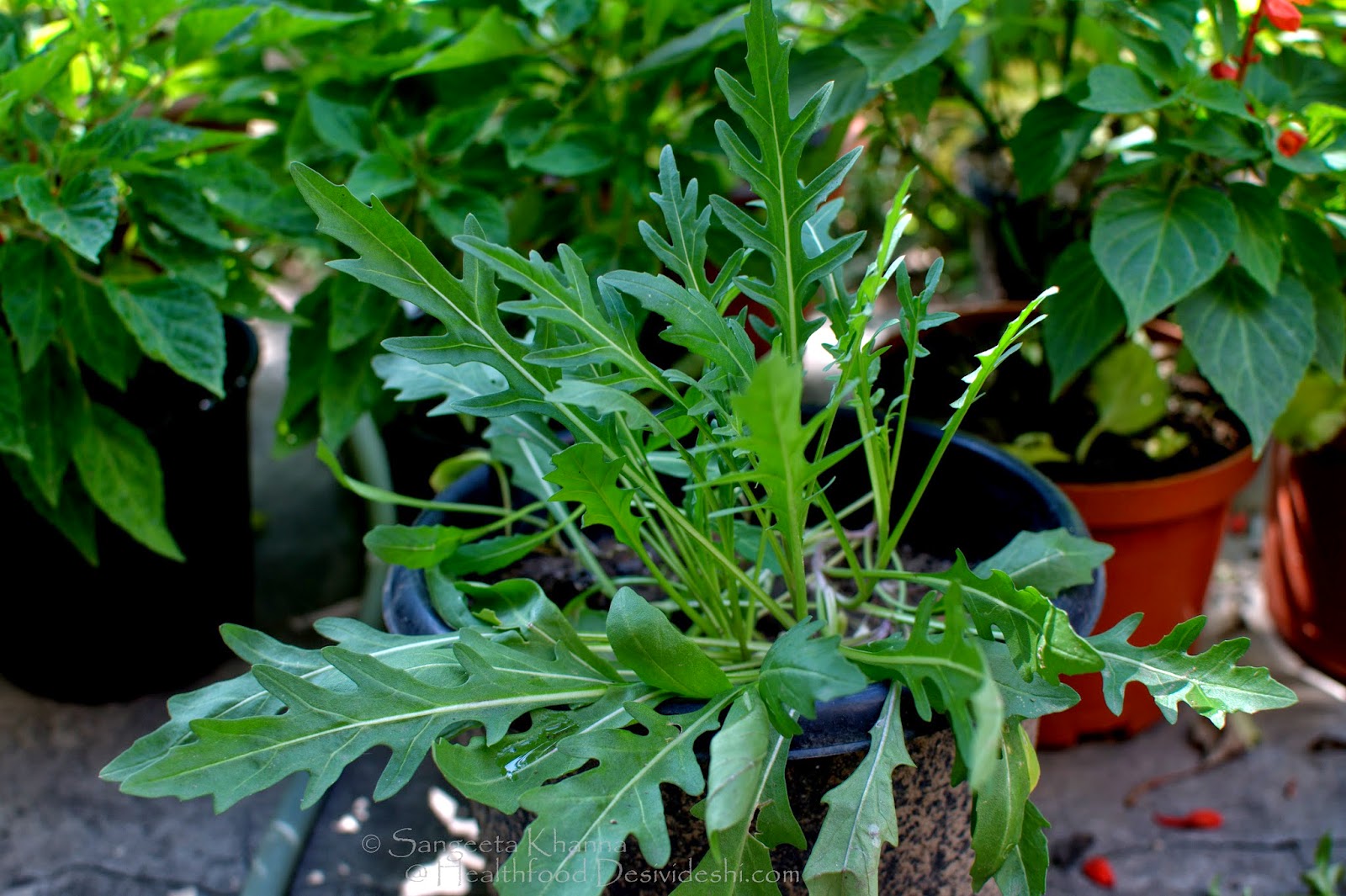 Arugula is Eruca sativa, the plant grows up to the height of 4 Ft in my garden and then the branches start trailing on the ground or on trellis. Young plant produces large leaves and as the plant gets mature and bears flowers, the leaves get smaller but more and more peppery. So much so that many people just don't like it. I make pesto with the peppery arugula leaves by mixing them with some baby spinach.

This wikipedia picture makes it clear how the arugula plants look like. The flowers are a beautiful creamy white with dark veins running through the petals.

Here is how the mature leaves look. Flowering has just started in this plant. 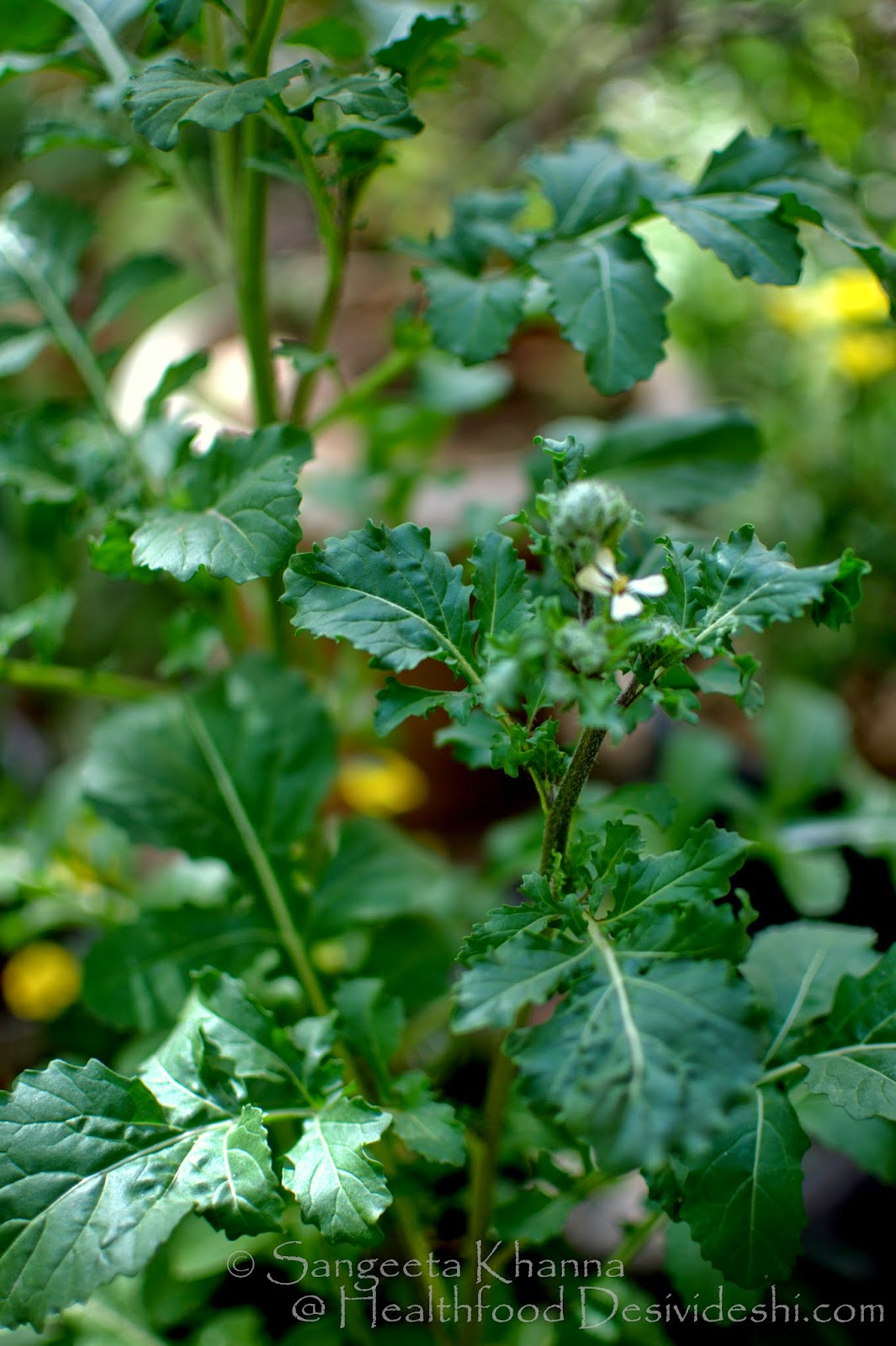 More clear shape of the leaves and a stout stem. 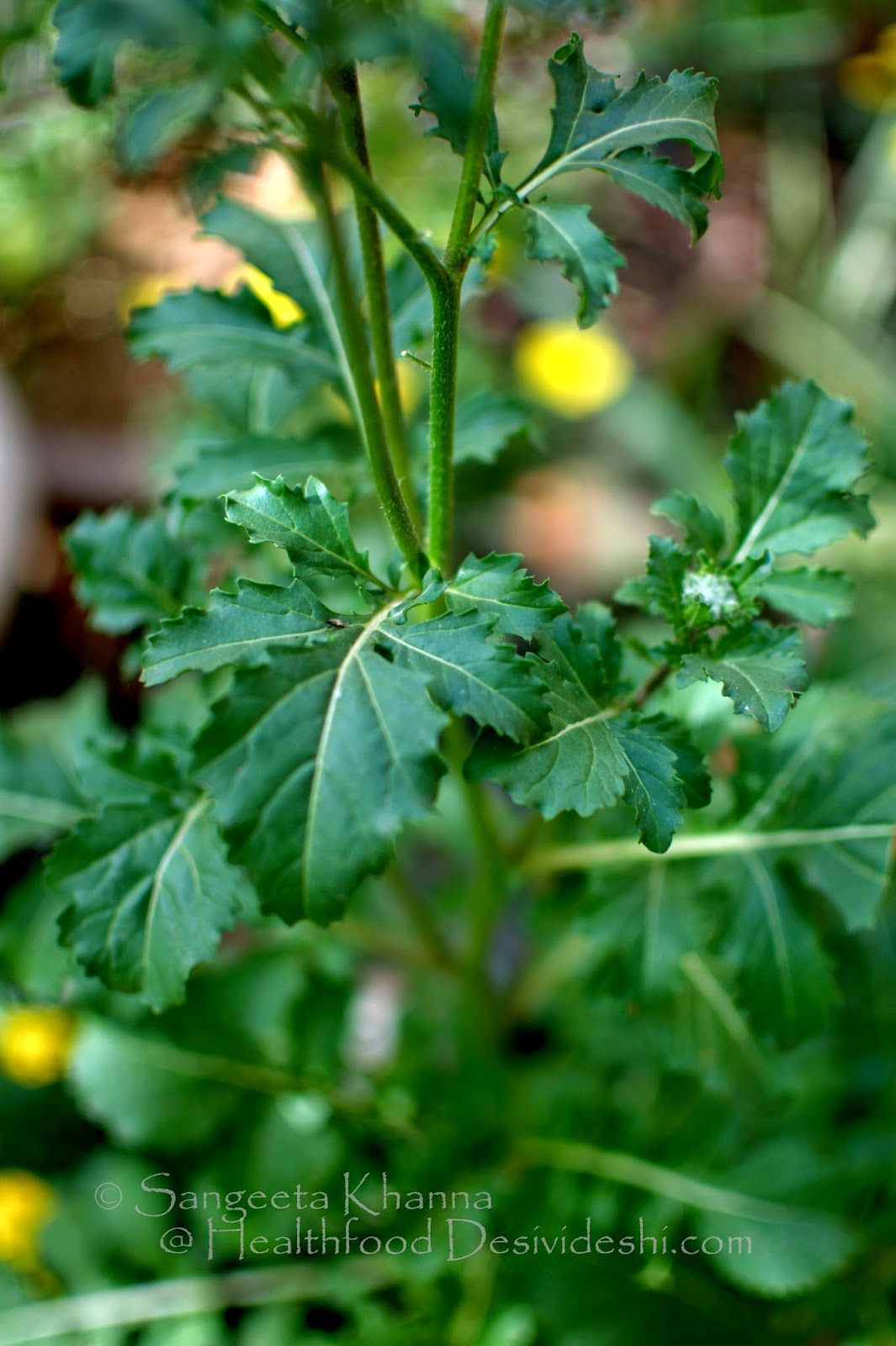 The leaves are quite peppery and I had to mix some baby spinach when I made this arugula pesto. 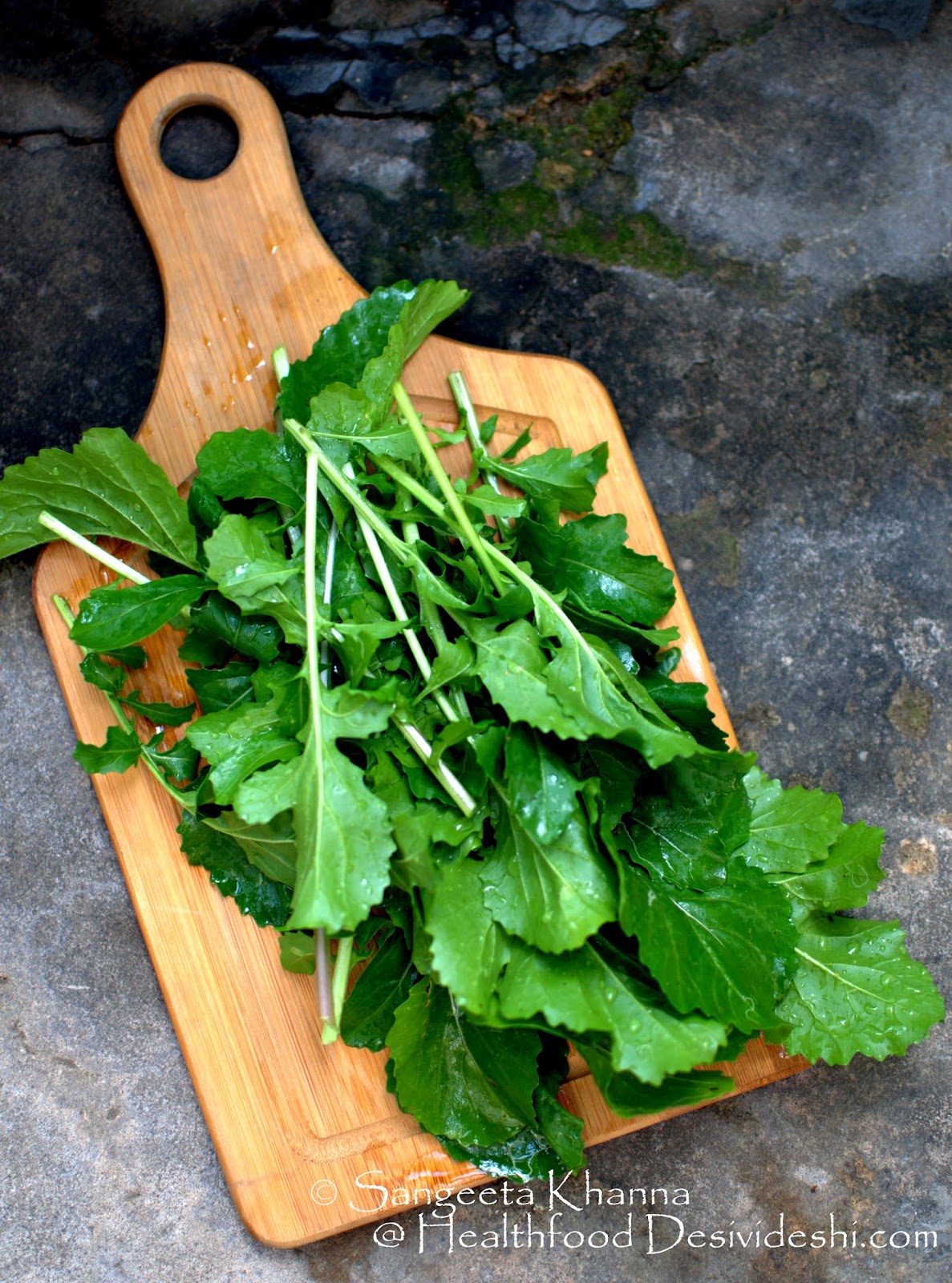 The flowering shoots of Arugula.. 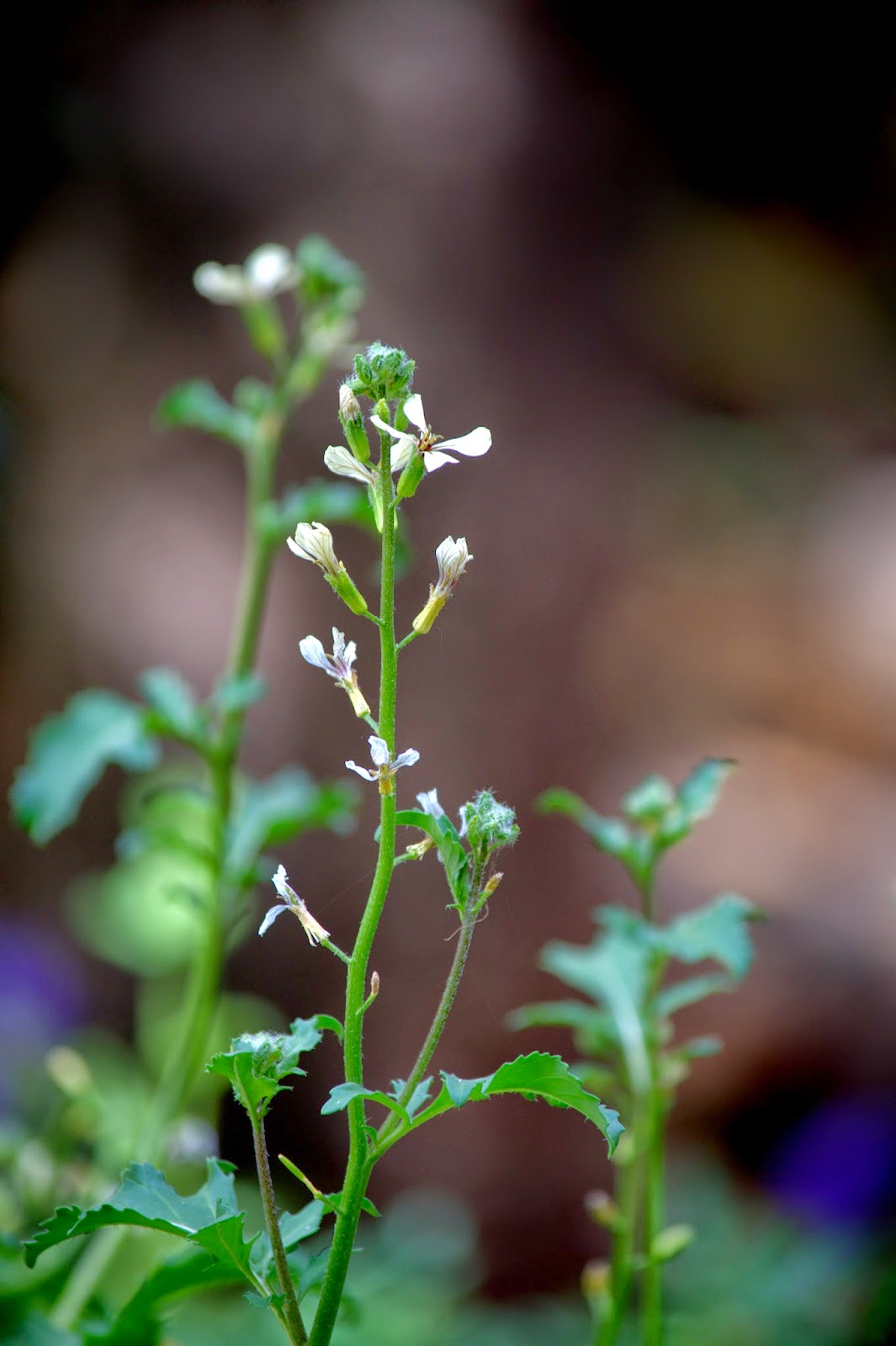 The flowers of arugula attracted a lot of bees this season. 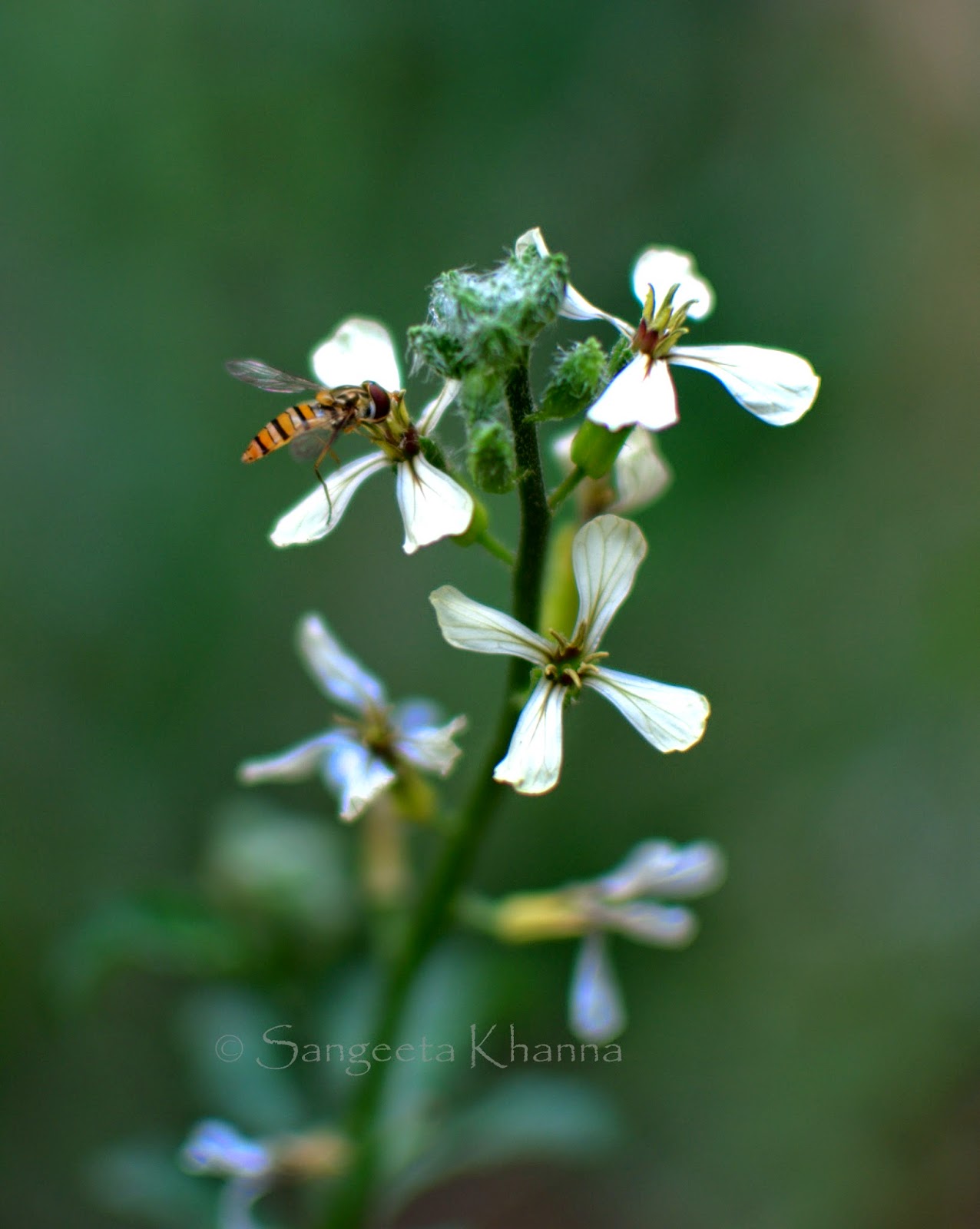 Rucola is Diplotaxis tenuifolia, also called as 'baby leaf rocket' the plant mostly trails closer to the ground in my garden even if the stem gets a little woody. The leaves are delicate, long and may be lobed or not. Some leaves on the same plant are smooth while some are deeply indented, actually a beautiful pattern. Rucola leaves are fragrant when plucked fresh or crushed but is not peppery in taste and stays the same in young as well as mature plant.. Arugula is not so fragrant.

This wikipedia picture shows how the plant looks like. Rucola has not flowered in my garden yet, it keeps on growing and behaves like a perennial plant. Flowers are yellow as seen on the wikipedia page. For more details on nomenclature and differences between the species along with how to grow instructions this page is a good resource.

This is my Rucola plant looked when it was young. That white flower is Chamomile that was flowering back then in winters. 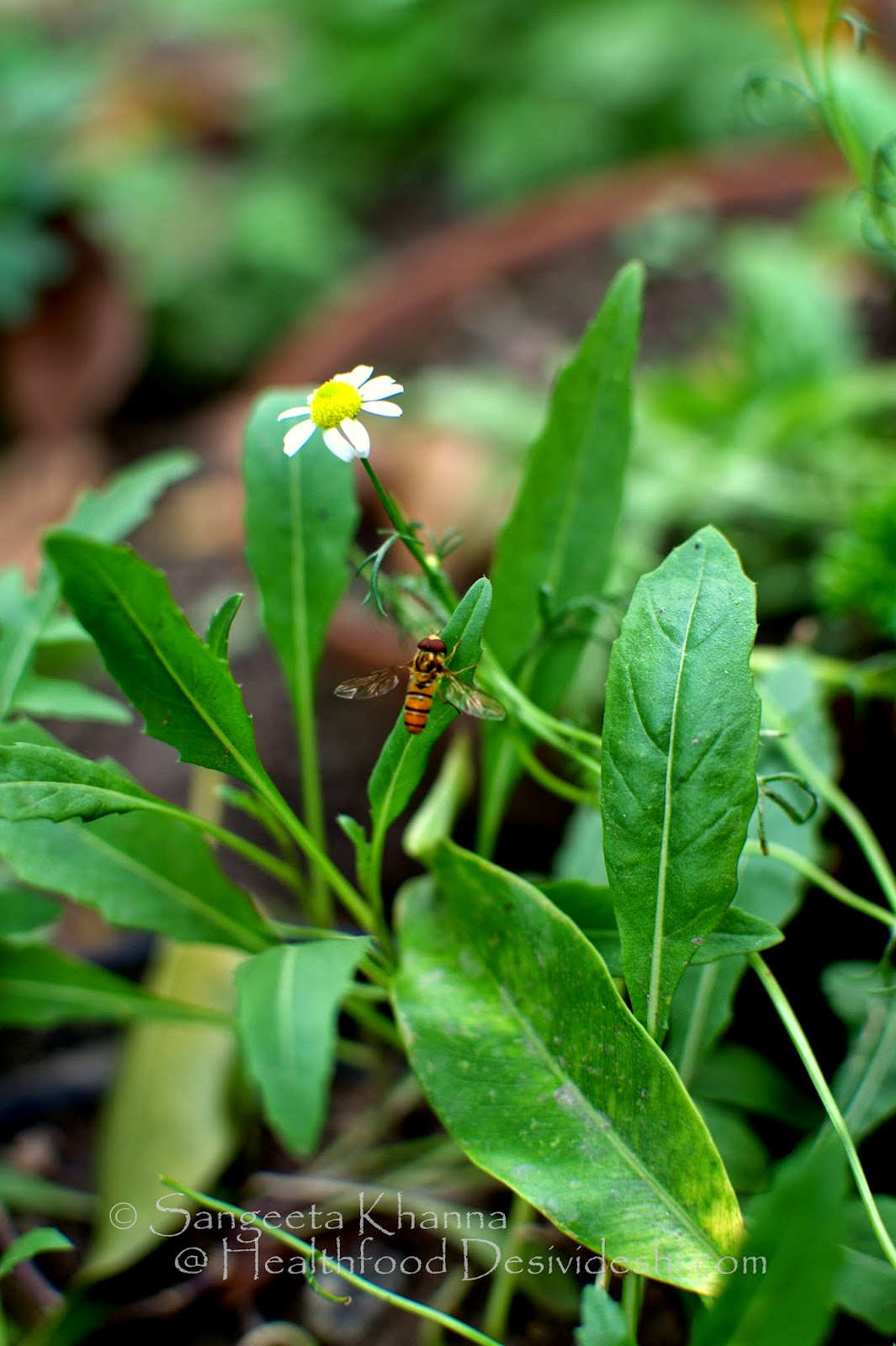 And then the leaves started getting serrated with deep furrows.. 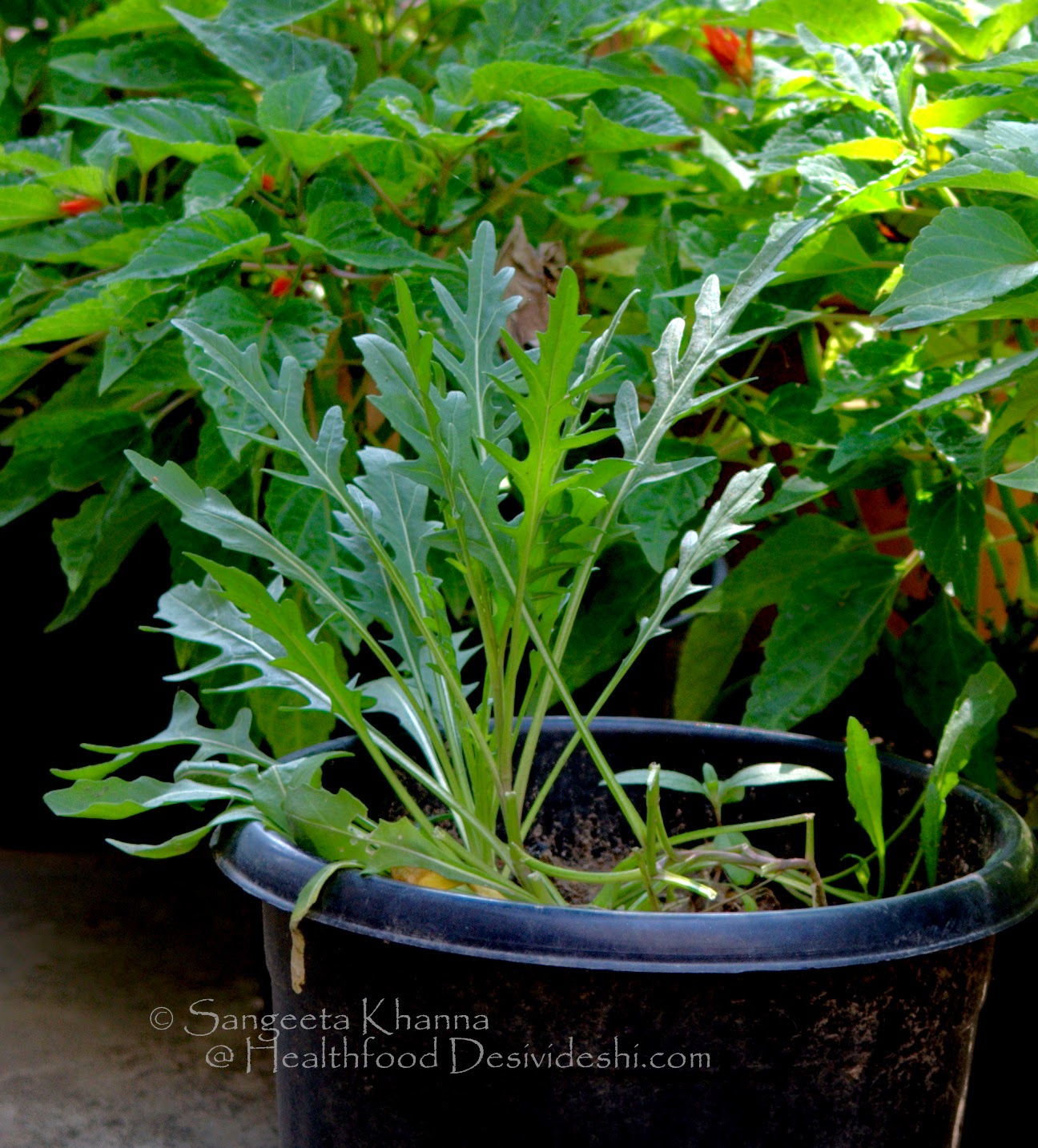 The rucola plant is happy when it rains. This picture is a day after rains and the plant was happy. 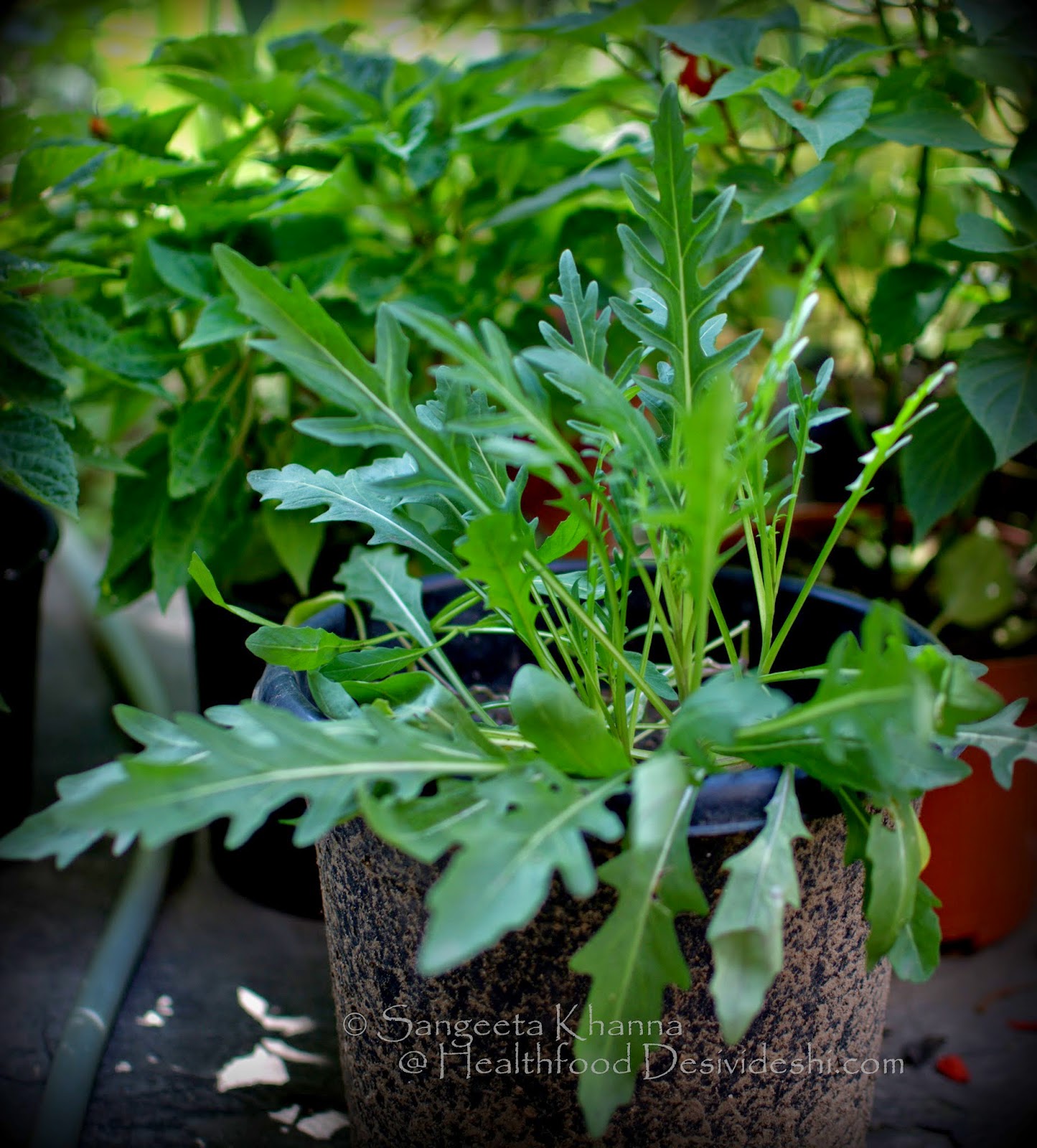 I had once plucked all the rucola leaves when I was going out for 2 weeks thinking I will loose all leaves anyway when the plants will not be watered everyday. The gardener is very irresponsible when we are not around. But to my surprise I saw new leaves sprouting from the stems when we came back.
The new leaves in the old plant too had smooth margins mostly. 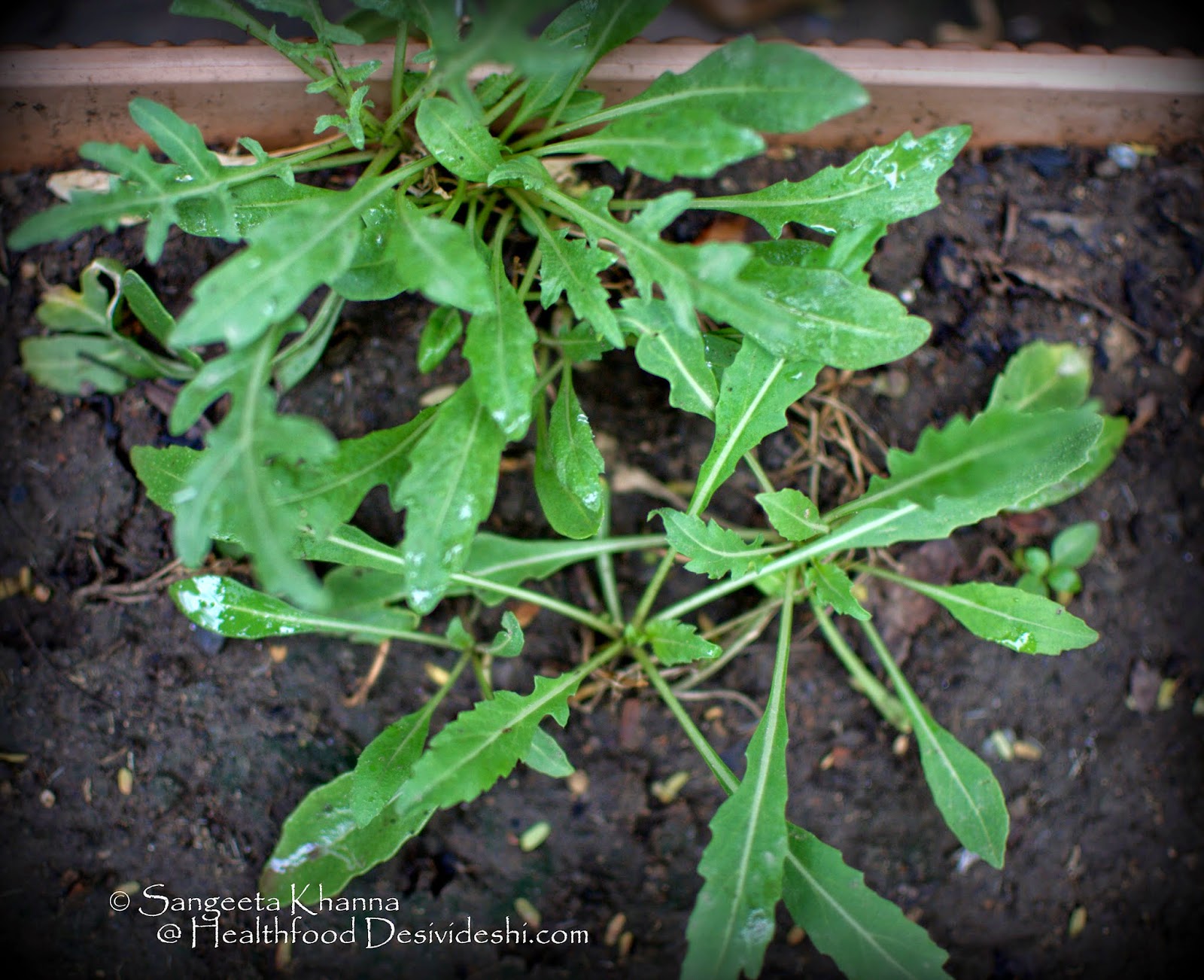 I transplanted about 6 mature plants of Rucola in a new pot and was releived to see all of them survived but one. And all of them are sprouting new leaves constantly. Now the plant has become trailing climber type but has not flowered yet. The last time I had grew Rucola it died when we were out of town so I could not see any flowering even then.

Rucola behaves like a perennial thankfully and should keep giving more leaves for a longer duration.

Here is how it looks when the branches trail in a 10 month old plant.. 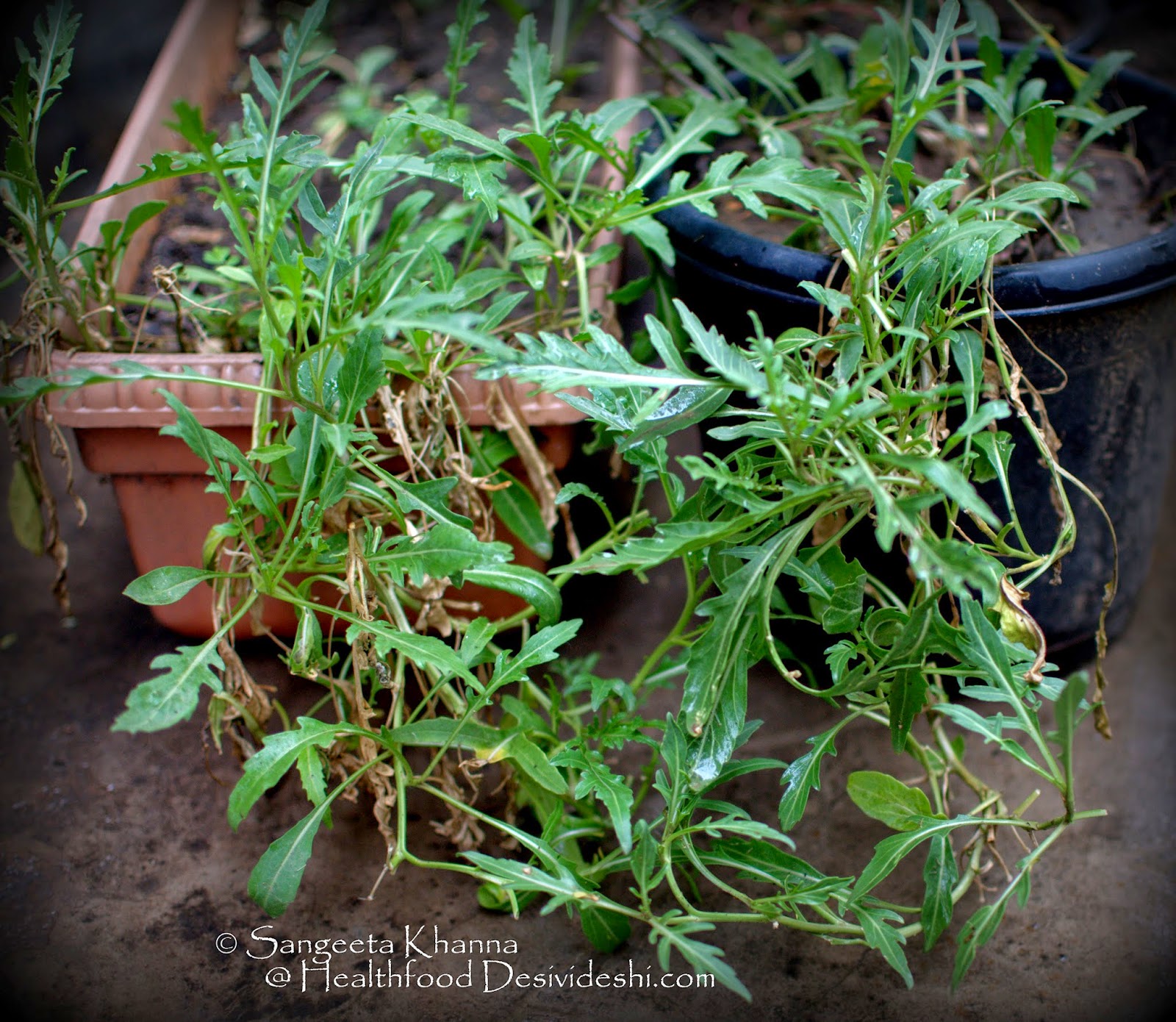 I add rucola to salads, to buckwheat pizza topping, and to potato and tuna salads. Even to the beans and potato salads I make. Argula is also added to almost the same dishes but the peppery nature of arugula is better for salad without mustard dressing.

I am sure you know more about the rockets you consume everyday :-)
Please let me know if this post was helpful.