a masterclass with Chef Maurizio Raselli on simple Italian food : green beans and potato salad and a spinach and ricotta ravioli that was made the very next day 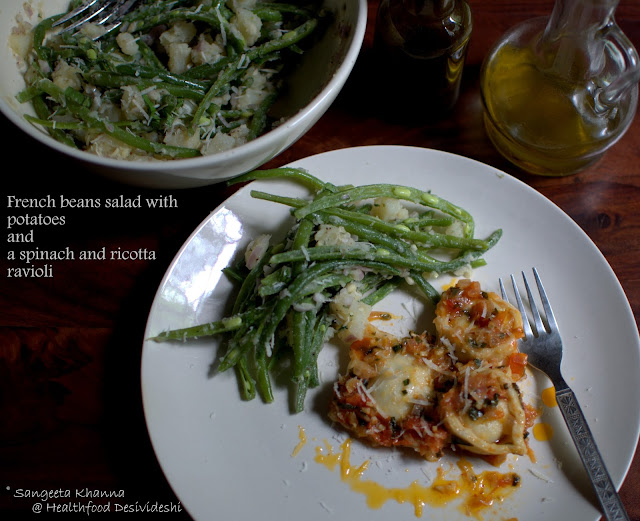 This green beans (French beans) and potato salad is one of the best cooked type salads that I have had in a long long time. I am already hooked to it and made it twice last week. The spinach and ricotta ravioli was made a few times earlier but watching an acclaimed Italian chef kneading the pasta dough and shaping those ravioli and tortellini, you pick up the finer nuances of making pasta. Let me first tell you how much we loved this salad with blanched (read almost boiled to cook) green beans and boiled potatoes. Loads of EVOO and loads of parmesan later, the salad is a winner all the way. The husband kept looking at what I was doing with his favorite potatoes last weekend and both of us finished the salad almost immediately. 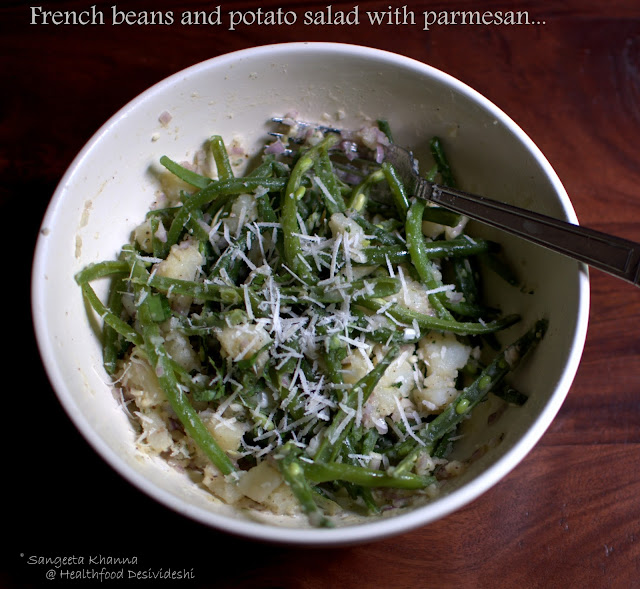 What I loved the most, that the beans were boiled whole, chopped off the tips and then these were split from the seams. This is such a simple thing to do so the beans would soak in more flavors but somehow never occurred to me. I keep making stir fried, steamed and microwaved green beans sometimes with garlic, sometimes bacon and sometimes just with salt n pepper but splitting the beans would result in such great flavors I never thought of. Thanks to Chef Maurizio Raselli, I now stand educated :-) 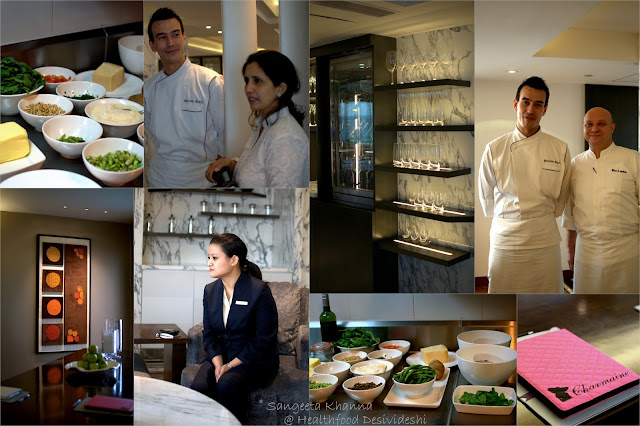 This masterclass was conducted at Hyatt Regency Delhi. Ruchira, Deeba, Mukta and myself were eager for this masterclass as we were greeted by Chef Marin Leuthard and Chef Maurizio. The spread of raw vegetables, sea food and cheeses was such a sign of all good things to come our way. Yes we learned this salad, the ravioli, a wonderfully flavorsome seafood and asparagus risotto and a freshly made tiramisu. Vidhi Jatia, CEO and Director of Charmaine (personality development school) accompanied us and introduced how these privileged masterclasses are bringing foodies together.

See how this green beans and potato salad is made in this step wise collage. 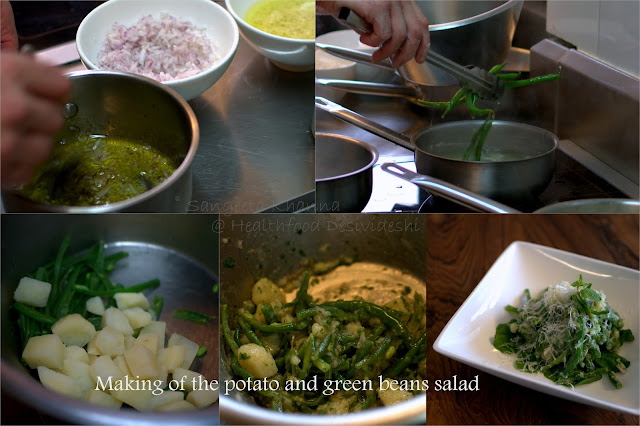 You mix the garlic, finely chopped red onions, some white vinegar and seasoning in generous amount of EVOO. Boil and split the green beans, boil and cube the potatoes and toss together with the dressing. Grate lot of Parmesan (about 10% of the total salad) and be ready to eat it out of the mixing bowl Or serve it with some fresh rocket and mint, may be some chopped almonds as well.

Next was the ravioli and we were curious to see the chef doing it from scratch. The white flour was mixed with durum wheat semolina, eggs were broken into it, EVOO was squirted into it generously. More egg yolks can be added for more color and richer texture. Adding more egg white wouldn't be good for the thinness of the pasta sheet after cooking. Kneading the dough really stiff helps a lot I learnt. Earlier I used to knead it a bit softer than what I saw. 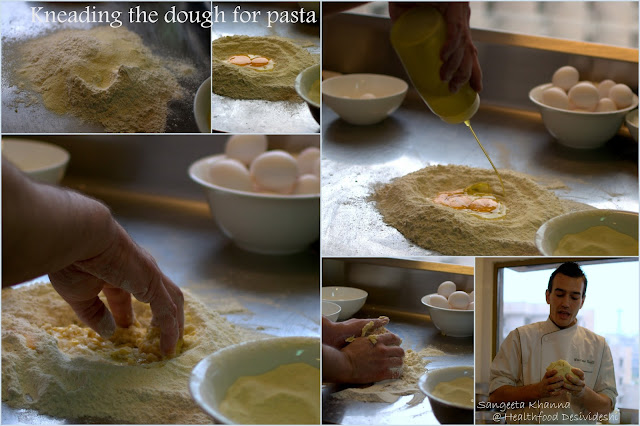 Spinach was blanched, squeezed out forcefully to ooze out as much water as possible and then minced properly. Fresh ricotta, herbs, garlic, Parmesan and seasoning, a good mix and the stuffing is ready. 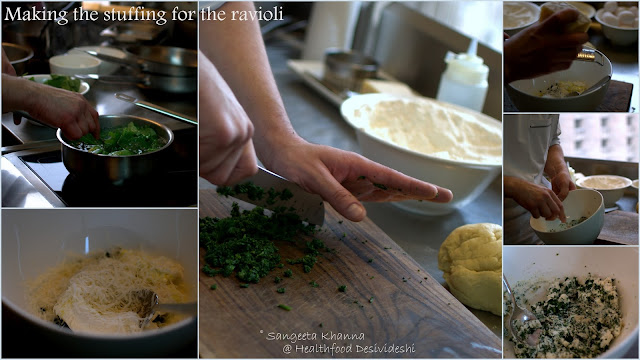 Pasta was rolled out and stuffed nicely. No air pockets in the stuffed pasta and a wider (than I make) frill of pasta around the stuffed center. Some ravioli, some tortellini though the Chef swapped the names of ravioli and tortellini in my head. The folded ring is the ravioli and the flat disc was tortellini he declared. The Internet says the opposite and it adds to another confusion regarding shapes of pasta in my head :-) 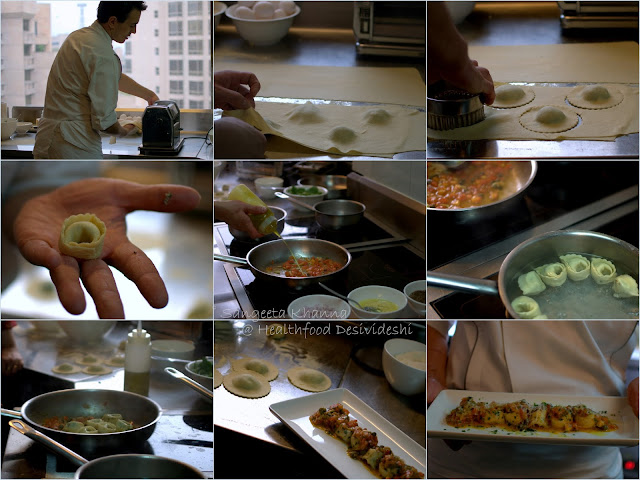 A very interesting thing that Chef Maurizio shared that the lasagna sheets should never be boiled and should be layered raw into the baking dish. Increase the cooking time and you get the most flavorful pasta. to me it would mean less work to do as handling large sheets of lasagna in boiling water is a pain.

Next was risotto, made using carnaroli rice and not the arborio.  And the resultant risotto was to die for. Seafood was added in tow stages, first at the time of searing the rice in butter and later just a couple of minutes before finishing the risotto. 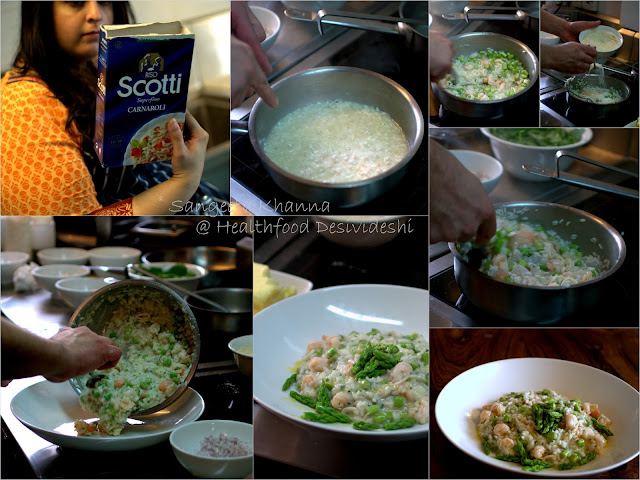 Those small little tips to make the risotto oh so flavorful. This was a masterclass I tell you.

The tiramisu was assembled with freshly whipped egg yolks and whites (separately) and folding it into mascarpone that tasted richer in lactose flavors than the mascarpone we use. My homemade mascarpone has more fat content I felt. It was just rightly sweetened and lovely flavors of coffee with mousse like creaminess. 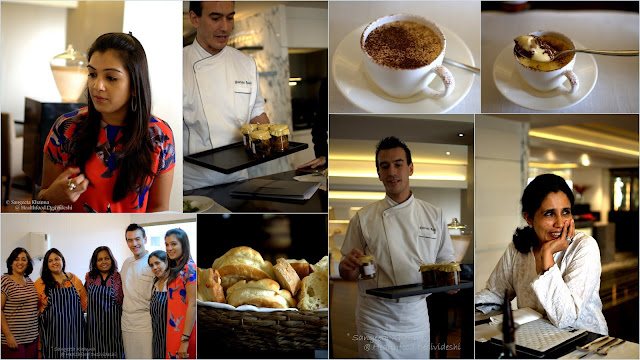 the same menu was served to us for lunch as we talked about healthy food, baking, farming, procuring seeds and what not. Chef Maurizio packed cute bottles of freshly made bruchetta topping for us. What a nice gesture and what a nice charming personality he is. He kept us in splits all the time with his antics.

Thanking Vidhi Jatia, Arpana Pradhan and Riya Dey for having us and for such a warm affectionate lunch that we had. Chef Maurizio can't be thanked enough for the good time we had. 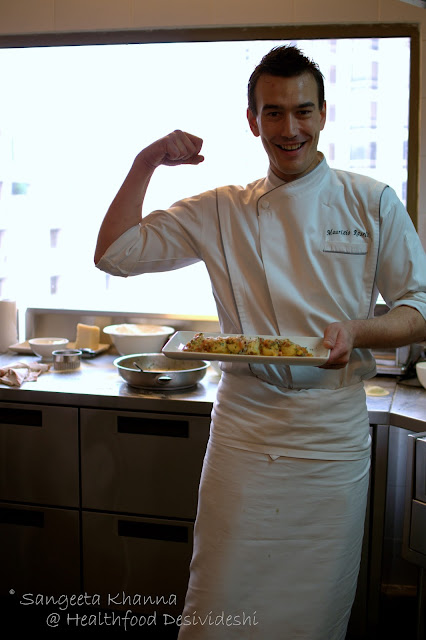 See how he poses for the camera. And cooks awesome food for soul.

I would make the tiramisu with his recipe very soon and share it with you all. We learn so much from
personal interaction type sessions. Charmaine keeps conducting such classes and one can join them to learn more from such interactive lessons.