Fermented drinks and condiments : Pineapple kanji : a kanji made with pineapple peels.... 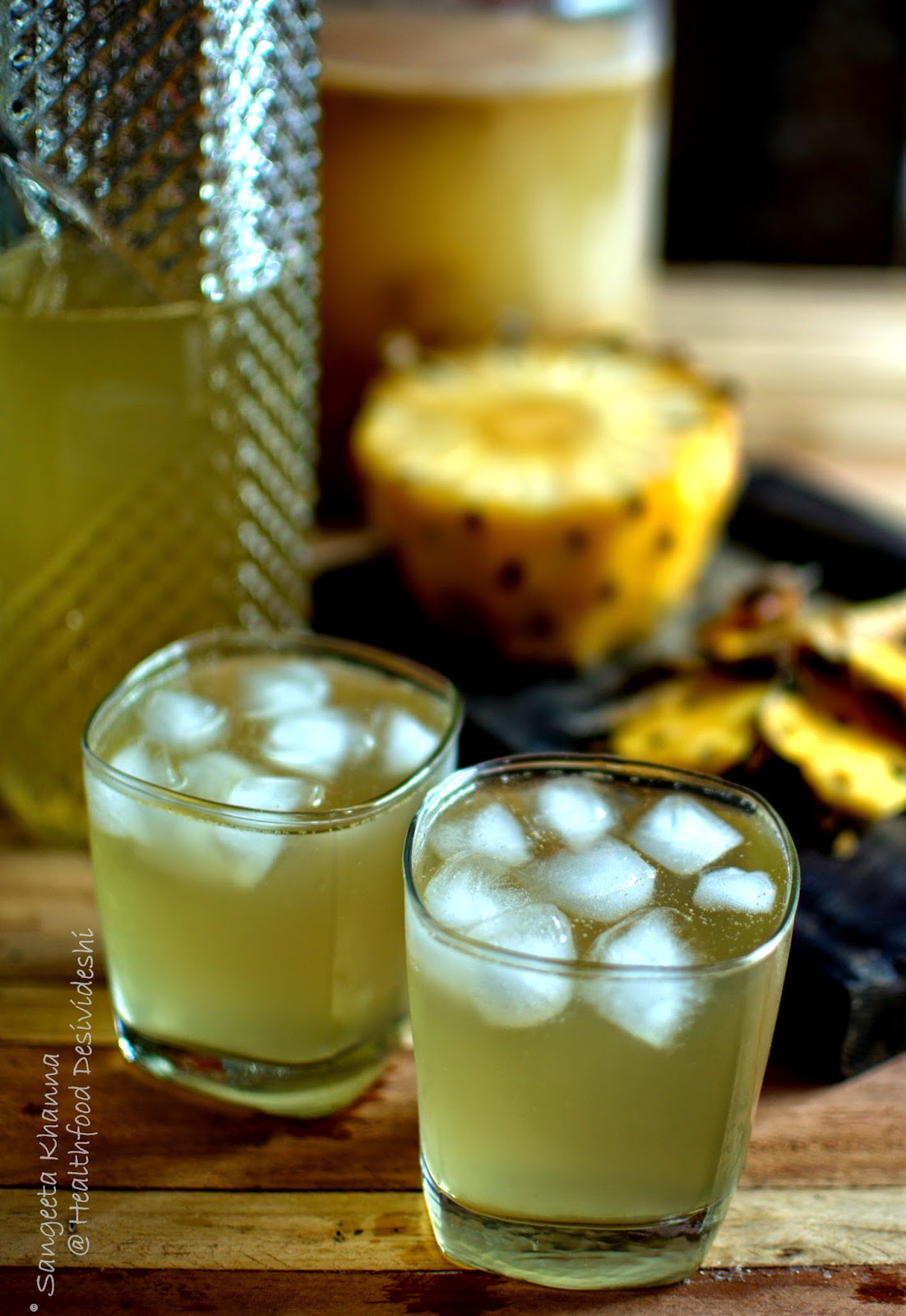 I never knew pineapple peels would pack in so much flavors. I have been experimenting with fermented drinks and salads for ever. Having worked in a microbiology lab keeps the fire ignited all the time, the friendly microbes are always close to heart. I started experimenting with this pineapple kanji 2 years ago when a few carrots were dug out from the garden and those were too fibrous to eat. I usually would soak them in water and required spices to make the kanji but that particular day I was peeling a large ripe pineapple for my salads. It used to be a pain to see so much of juicy bits of pineapple flesh being wasted along with the tough spiny skin. I did an experiment that day. 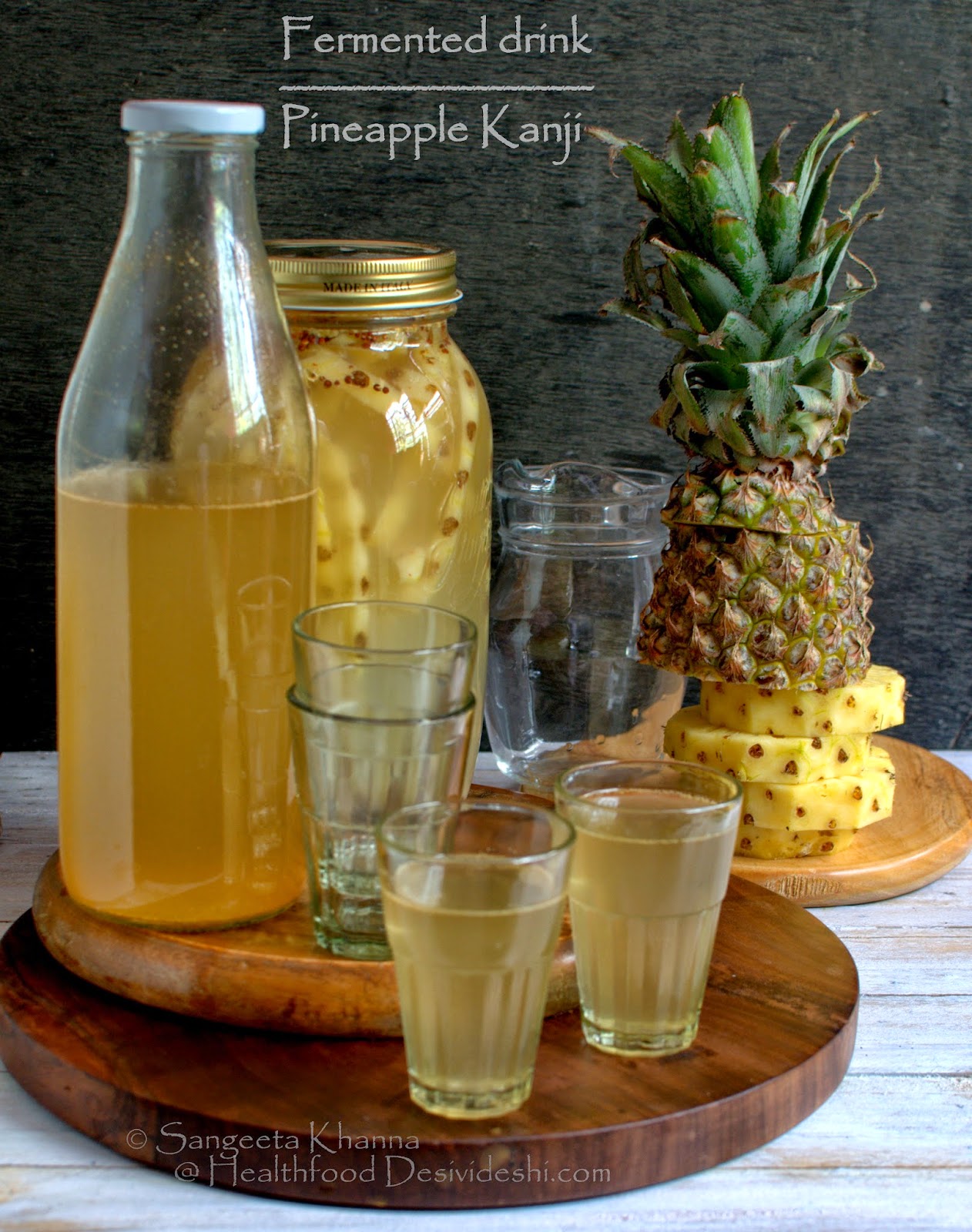 The pineapple was cleaned before peeling with a soft brush under running water to clean everything from the rough skin. Then it was peeled as I would do so normally. All the peels and small bits that come with the 'eyes' were thrown into the kanji jar along with the 2 fibrous carrots. A wonderfully refreshing drink was ready after a week and I was amazed at how much flavors the pineapple skin still retained.

Later I started making kanji with just the pineapple peels and pith. The carrots were skipped conveniently. After all carrot kanji is a different thing to enjoy on it's own. 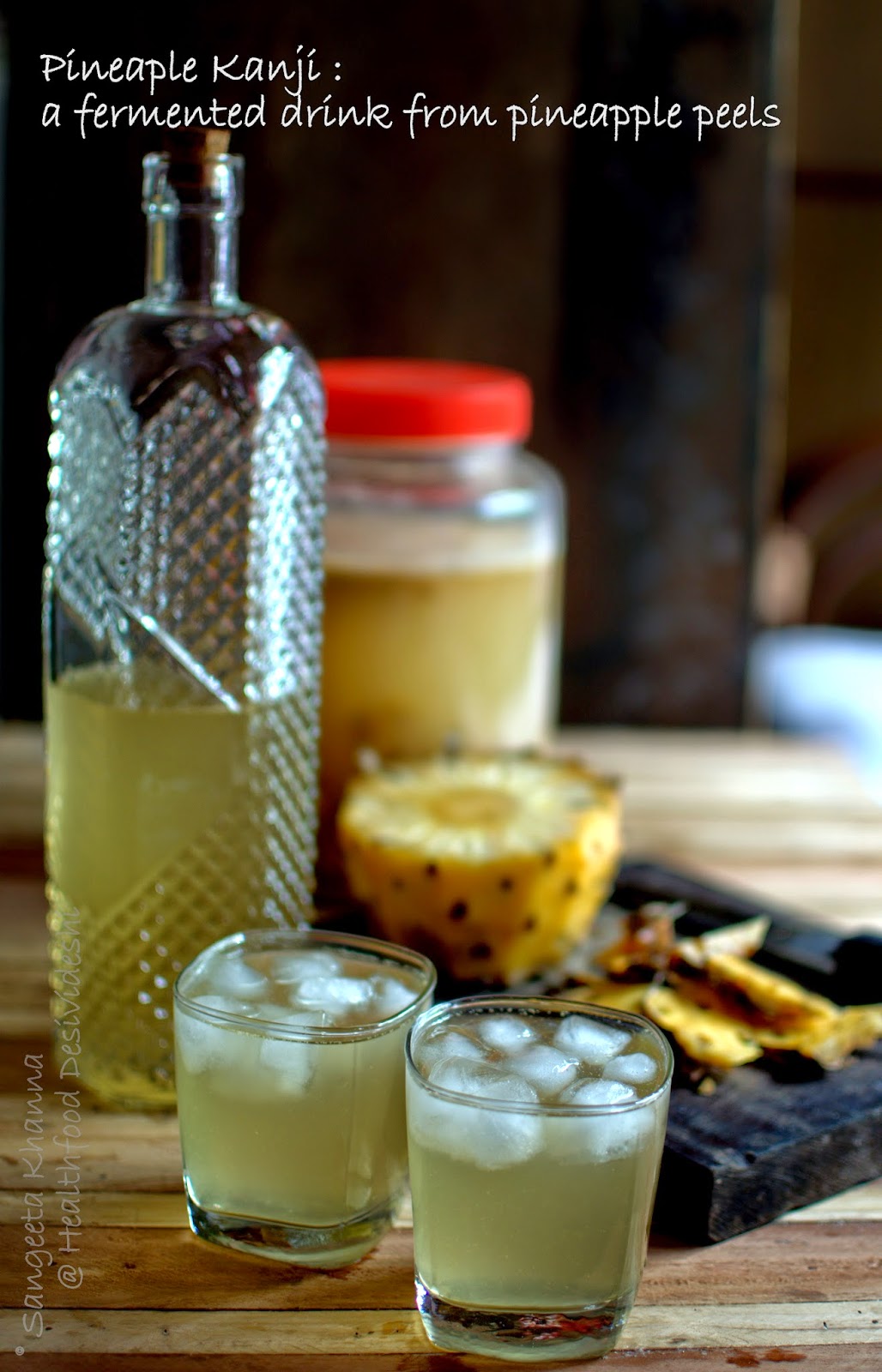 Actually the skin and the pith of the pineapple is quite rich in Bromelain, the digestive enzyme that helps digest dense proteins easily and the vitamin C and Manganese content of the fruit is very high hence the anti oxidant property of this fruit. Manganese helps absorb and utilise many other nutrients and it makes pineapple one of the healthiest foods.

So when we enjoy all this goodness in the edible flesh of the fruit, why should we waste such nutrients that we can harvest from the peel and pith as well?

The last batch of my pineapple kanji was ready today, ready to be strained and a bottle of 2 month old kanji was still lying around. You would be surprised to know this pineapple kanji is stable at room temperature once it is fermented well. Just add ice cubes in summers and have at room temperature in winters. It is a refreshing drink that you can have one glass everyday. Add soda to it and it becomes tingling smacking good.

Here is the bottle of 2 months old kanji, a freshly fermented pineapple kanji ready to be strained and a pineapple being peeled, it's fresh peel and pith ready to make another batch. No I am not mad, I just love what I do. 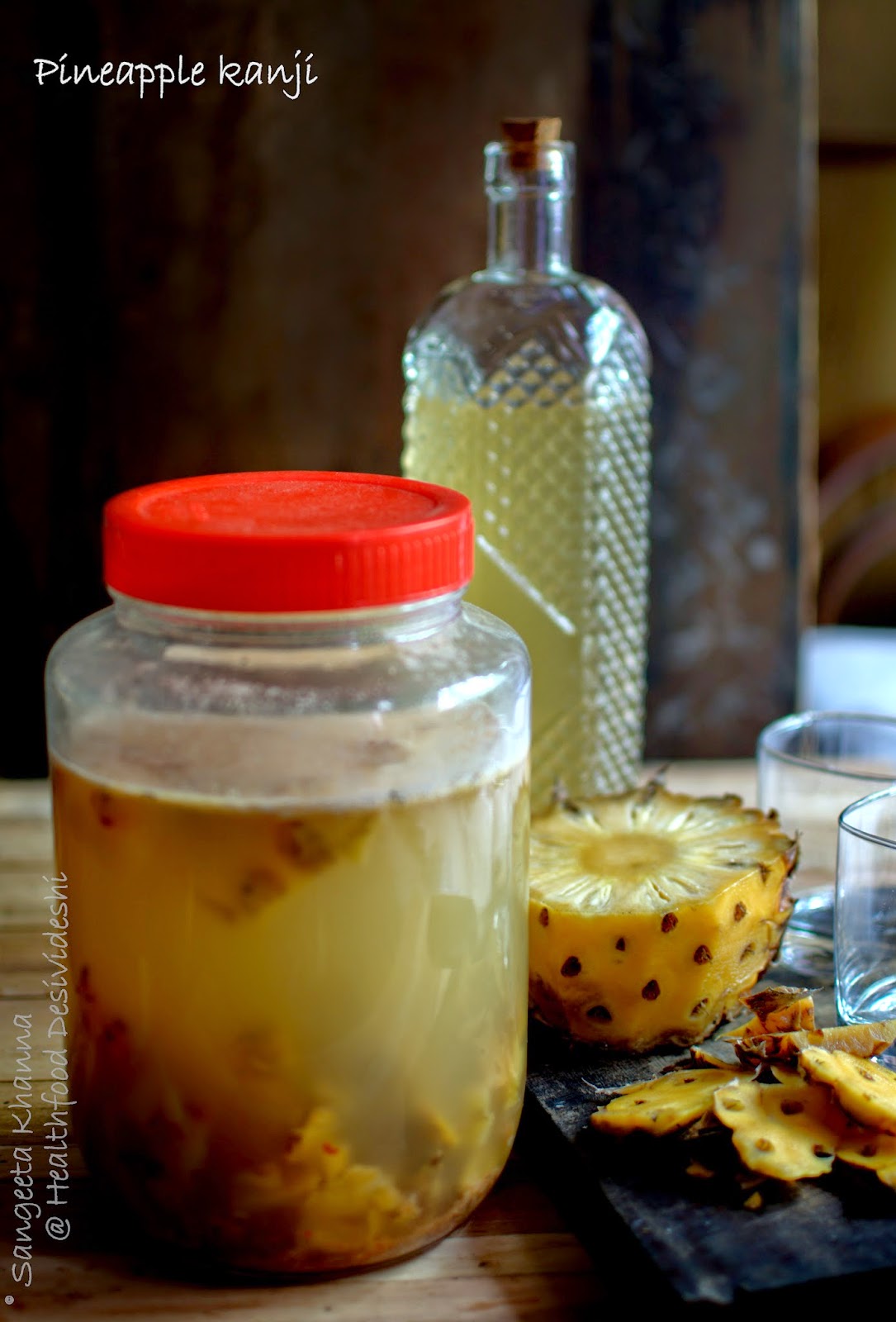 This is the 2 months old pineapple kanji with ice cubes. 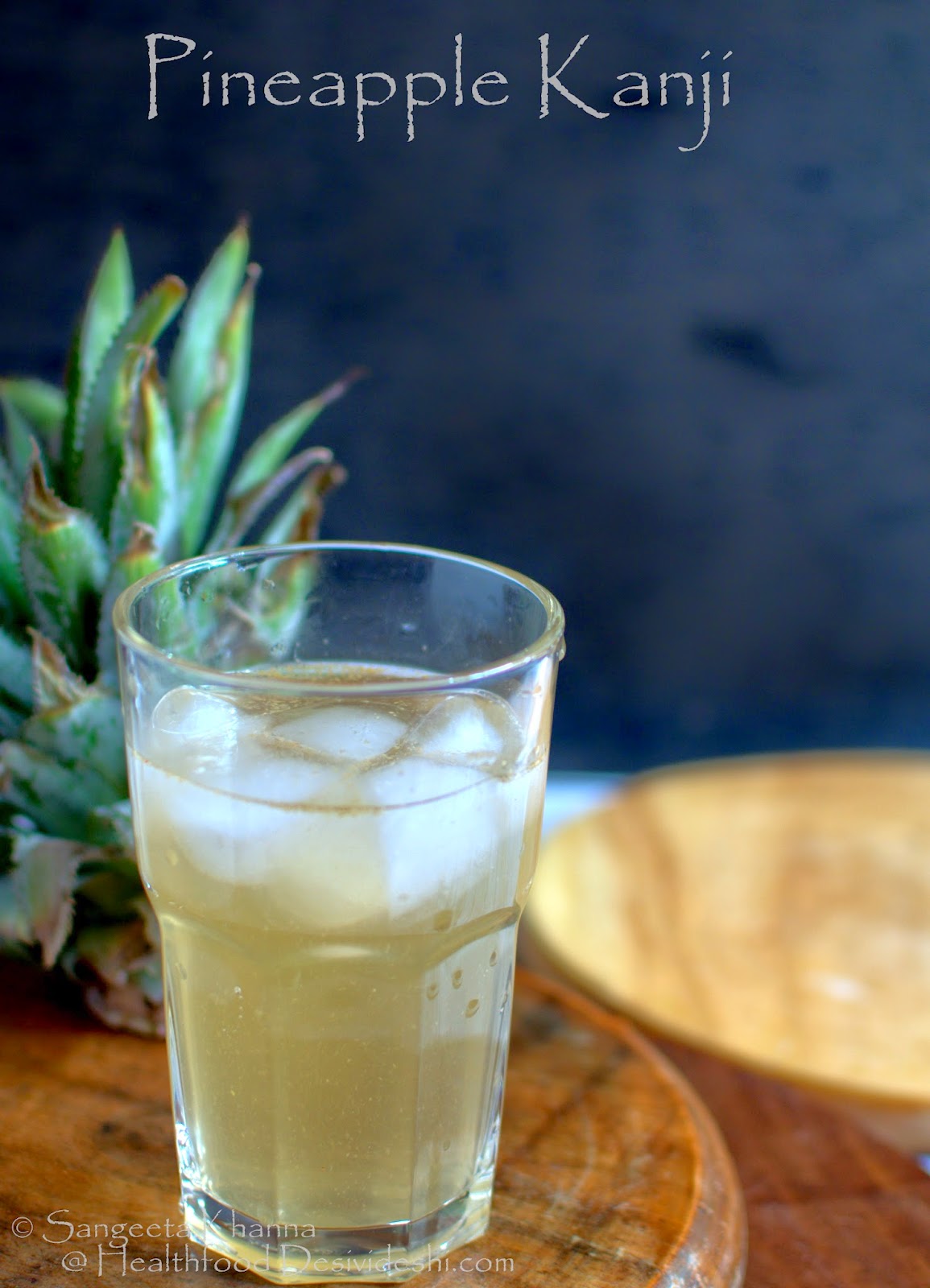 The contents of the fermenting jar are strained to discard all the peel now that we have extracted out flavors from it. The kanji has a really kicking taste of pineapples and the tangy taste of the usual kanji owing to mustard seeds and red chilly powder.. 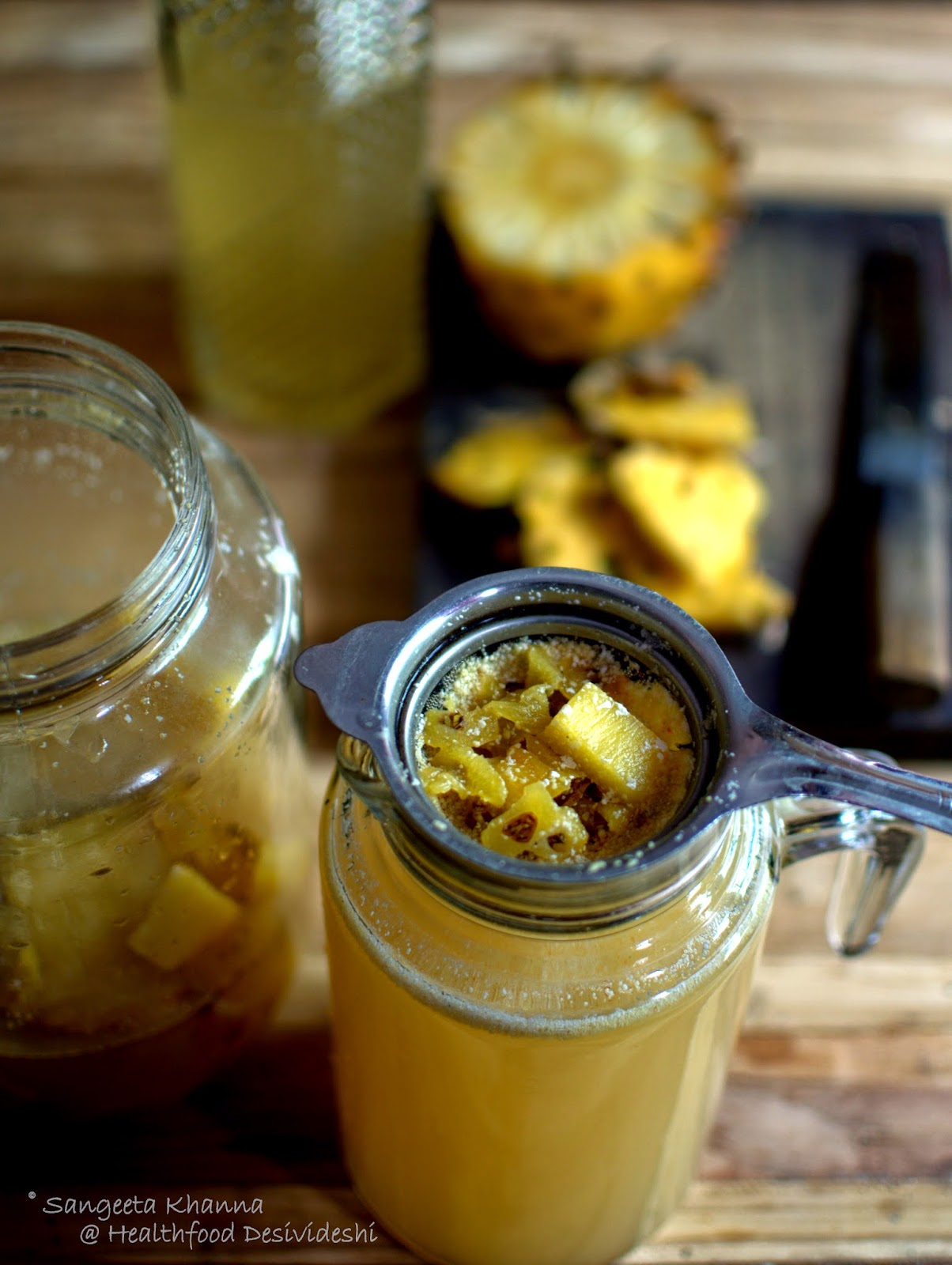 And the jar was emptied, cleaned and a new batch was filled in to ferment...

I added 2 liters of filtered water, 2 tsp of mustard seeds, 1 tsp red chilly powder and 1 tbsp table salt. Peels and pith of half a pineapple went into this jar.

This is a simple recipe to be followed. Keep this mix into a lidded jar and let it ferment for 5-7 days. This jar can be kept at your windowsill or on the highest loft of your pantry where some ambient light reaches. I have never tried fermenting it in dark but there shouldn't be a problem if you keep the jar in a dark pantry as well. 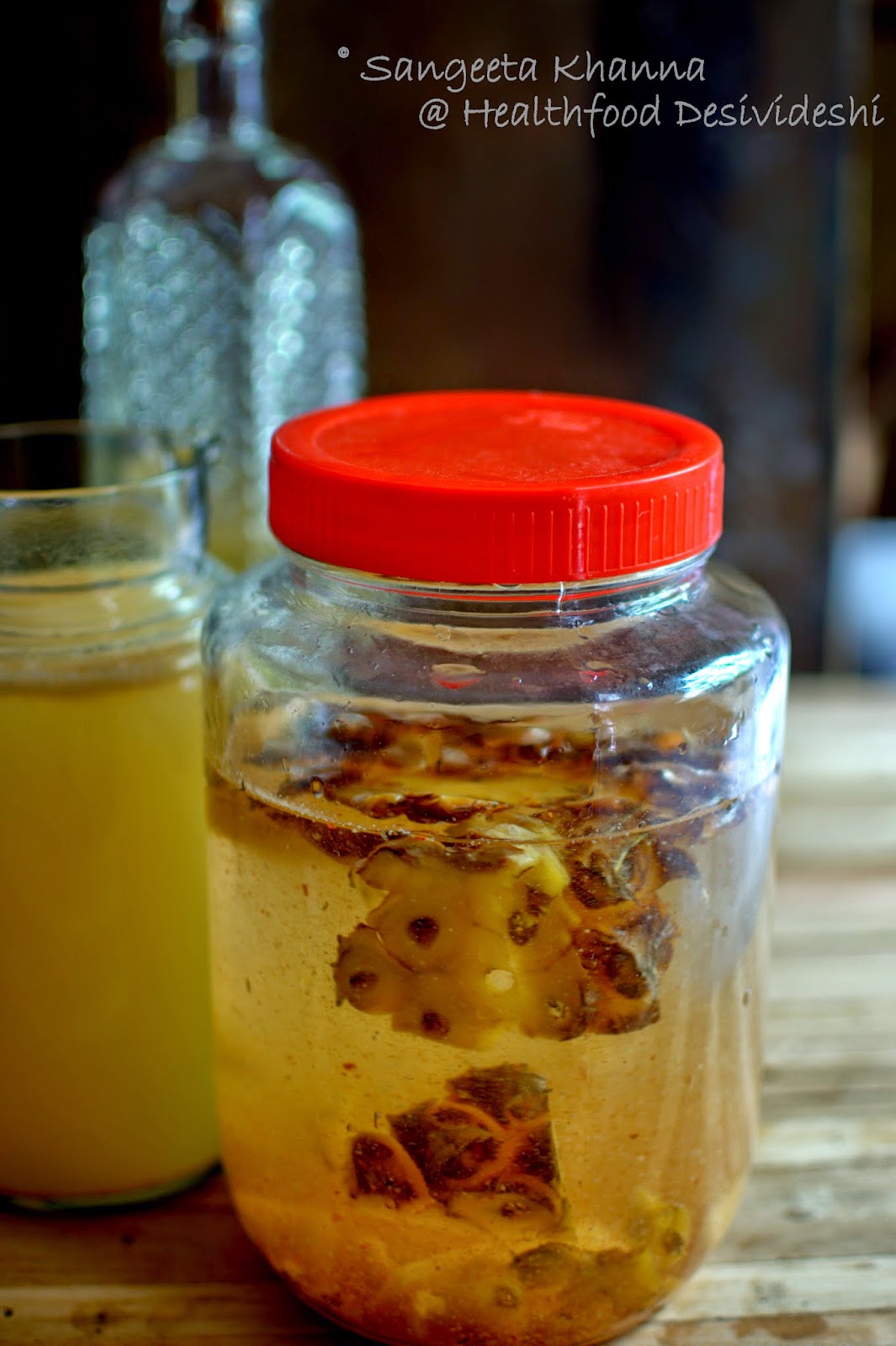 The amount of mustard added is lesser than kaali gajar ki kanji just because the pungency of mustard would kill the refreshing taste and aroma of pineapples. Mustard seeds initiate fermentation and once the culture has set in, starting form the ambient mix of yeast strains, the culture keeps growing till the fermenting mix is stable. Red chilly provides ambient lactobaccili and a few more mesophilic bacteria for sure. 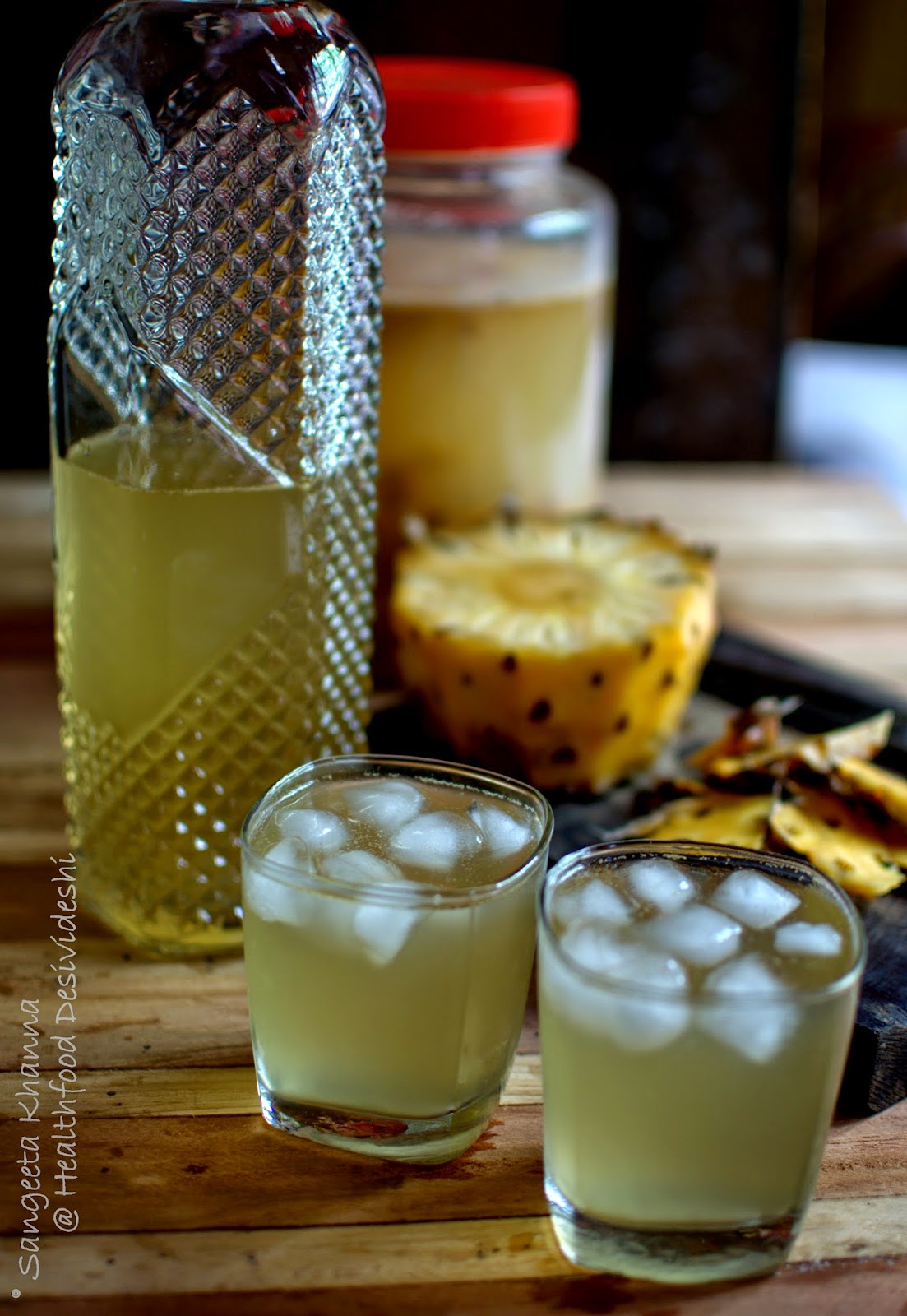 I am not sure what would be the percentage of acetic acid, alcohol and aldehydes in this drink, as I never tested it, but the drink is stable at room temperature unlike carrot kanji that keeps getting more sour at room temperature and has to be refrigerated for longer use. May be the Bromelaine or a high amount of ascorbic acid present in pineapple helps stabilise the drink but it is a great result for kanji lovers for sure. 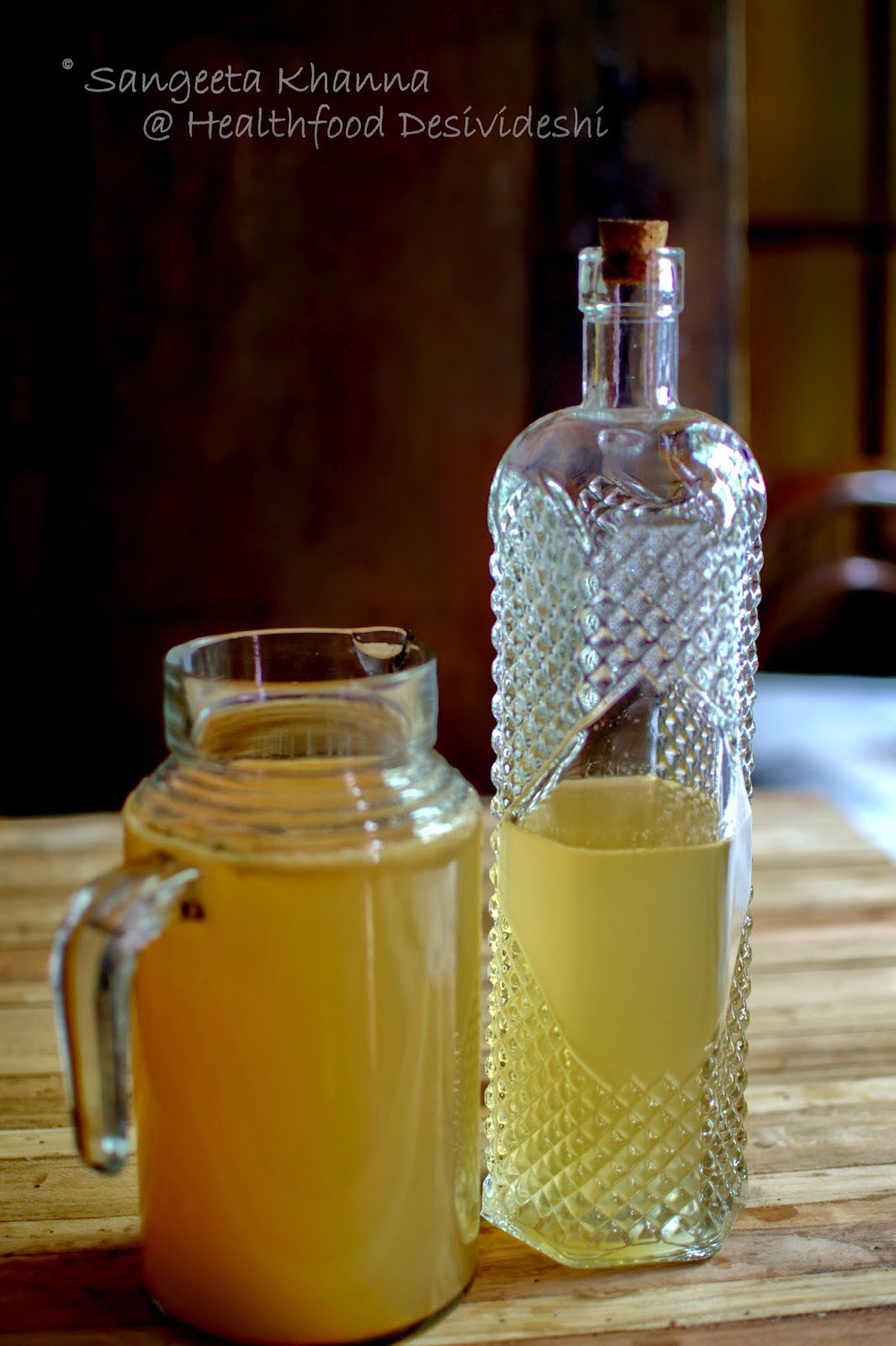 Please note that Kanji is wrongly judged as an 'acquired taste' (indicating it is foul smelling and weird tasting), but if your kanji is smelling foul it means the culture has become contaminated. Discard the kanji or kanji culture if it tastes foul. A thin white layer of mould will be seen on the fermenting kanji, just keep mixing it so no new strains of contaminants get a chance to grow in the same culture. This kanji has strong overtones of pineapple, sourness of the fermented sugars and a hint of sharp heat provided by chilly and mustard. A very intriguing mix of flavors in fact.

Ask me questions if you want to ferment your own kanji and something makes you feel nervous. I wish I could make you smell and taste this drink now.
A few of my friends have already started making this :-)

I made this kanji with peels of watermelon as well, the white pith was used, the green skin was discarded. The drink was tasty and sour as a kanji should be, but not as refreshing and aromatic as this pineapple kanji, neither as colorful as kali gajar ki kanji. But the watermelon rinds become a nice pickle after you make the kanji. So if you like pickled carrots or watermelon peels you can make the kanji with those as well. For me, pineapple kanji is a winner and I don't bother making watermelon peel kanji anymore.