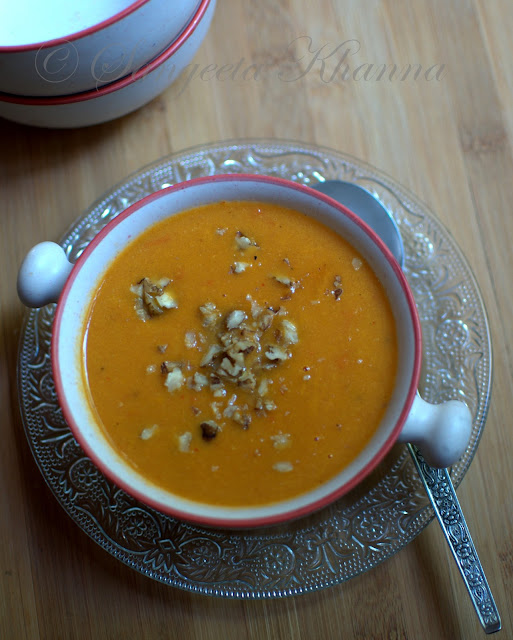 Bell peppers are not very welcome in my home. The husband is intolerant to them if not allergic and can smell it in many nondescript curries and tikkas when eating out. He wouldn't feel like eating any food after that most of the times. The green capsicum, tomatoes and cashew paste is so much abused in the north Indian curries and stir fries that it becomes difficult for him to enjoy food outside. Not that he chooses to eat out, but he has to eat outside food sometimes in conferences and his official meets nevertheless.

I get bell peppers for myself many a times and cook something just for my own sake during the day time. One of the many benefits of working form home. This way I can eat bell peppers and not make him nauseous as cooking the bell peppers can be a torture for him owing to the strong aromas of bell peppers. Truth to be told, even I like those aromas subdued as I find it too overpowering for me as well. Anyways, I get to cook them so rarely that you wont see many recipes with bell peppers on Healthfood desivideshi. 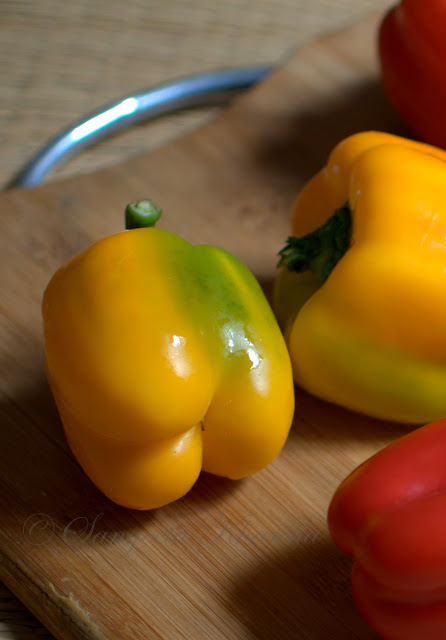 I do love the burst of colour they have. Bought some fresh bell peppers the other day with an intent to cook a nice soup with them. I live on vegetable based soups in winters, for the warmth and comfort they bring. We eat a lot of meat and fish as well but soups are almost twice a day sometimes. You would know if you are a regular reader here, I can have soups even for my breakfast.

Although I am a soup personality throughout, I rarely make any vegetable stock for my soups. I like only the main ingredients to shine as it's always thick creamy type soups that I cook with vegetables. Bone broths I do with some spring onion, garlic ginger and a few herbs added and then convert it to a soup with dumplings or just egg drop, sometimes just a lot of chopped spinach if it is growing fresh in the garden. Basically no stocks in my soups. Whole vegetable to be used and some spice or herbs to enhance the flavors. Just that. And going by the way my soups are liked by all, I see no problem with it.

ingredients....
(1-2 servings depending on how big a serving you want)

Slice the peppers and tomatoes roughly. Chop the garlic cloves roughly too. 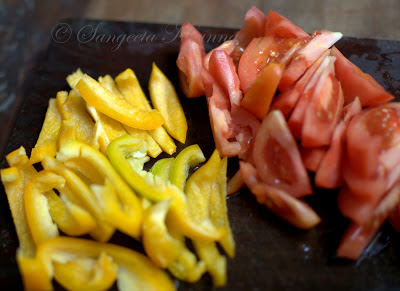 Heat the oil in a wide pan, ad garlic and wait till they start turning pink. Add the chopped bell peppers and tomatoes, salt to taste and fry for about a minute with paprika added. Cover and cook on low flame for a couple of minutes or till they become mushy. No need to add water if you want it creamy. I did not add any. 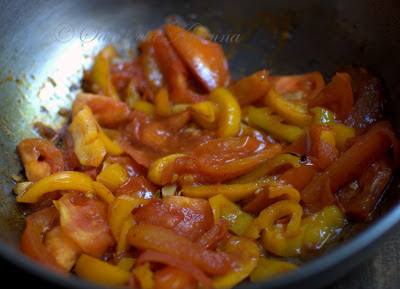 Transfer the contents to a blender and puree nicely. Transfer again to the pan and let it simmer for a minute. Transfer to serving bowls and top with crushed walnuts. 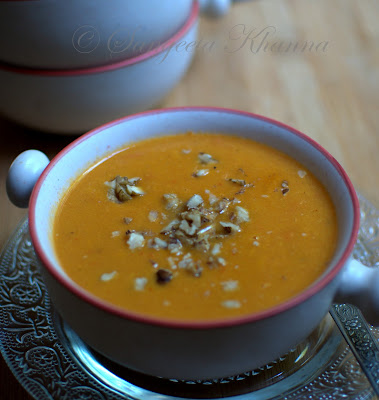 Walnuts add an interesting touch of nuttiness to bell peppers and tomatoes make the soup a little tangy in a very nice way. Since I had made the soup for myself only, the leftover was refrigerated. It tasted as yummy the next day too even when the walnuts had gotten soaked.

The soup does not need any herbs added if you want the bell peppers to shine. You can add some thyme in browned butter on top if not using walnuts. Or just a crisp intense garlic bread would be good for you. I rarely eat my soups with bread so this one was enjoyed as it is. 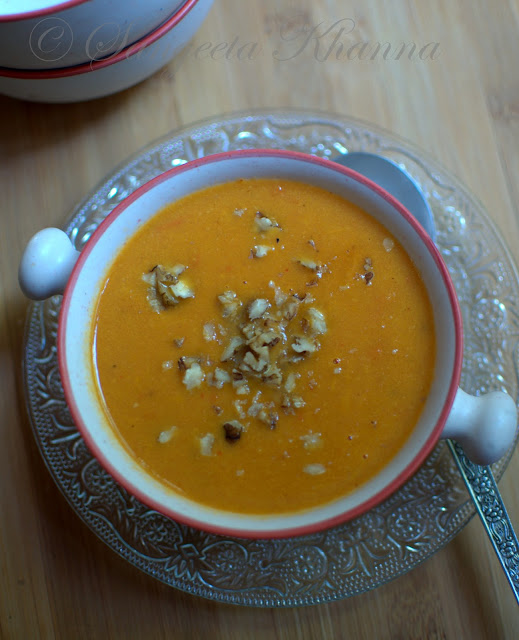 This is a cheerful bowl of sunshine. A soup that would make you hungry for the main course, it is thick and creamy but not at all heavy.

Add some fresh cream and a few pieces of cubed paneer to it and make it your meal. That will make it a 10 minute meal. Okay 15 minutes if you chop slowly, just halve the bell peppers and tomatoes and cook if you are lazy, it has to be blended eventually.

How are you going to have it ?