I rarely talk about Haute cuisine at Healthfood desivideshi as good everyday recipes are more on the center stage, some friends and readers call those recipes gourmet but I beg to differ. Gourmet sounds pretentious to me and my everyday food is all about taste and flavors presented simply, more because I want it to be doable every single day. Taste wise, I draw inspiration from every cuisine I come across either virtually or when it actually tickles my taste buds in the physical world. There is so much more to learn and explore, making everyday food more and more pleasurable both by the sensory faculties and the metabolic faculties, is the primary focus on this blog. The inspirations are fueled by meeting the masters sometimes and that is precisely what happened last week when I was invited by Four Seasons for an exclusive gourmet evening with Michelin star Chef Baptiste Fournier from France.  An occasion for pairing fine French cuisine with excuisite award winning wines from Bouvet-Ladubey and Four Seasons. Hosted by Abhay Kewadkar, Director, Four Seasons and Anil Chadha, General Manager ITC Mourya. Venue was the West View restaurant of the hotel which is on rooftop with a nice view of the best green and serene parts of Delhi. 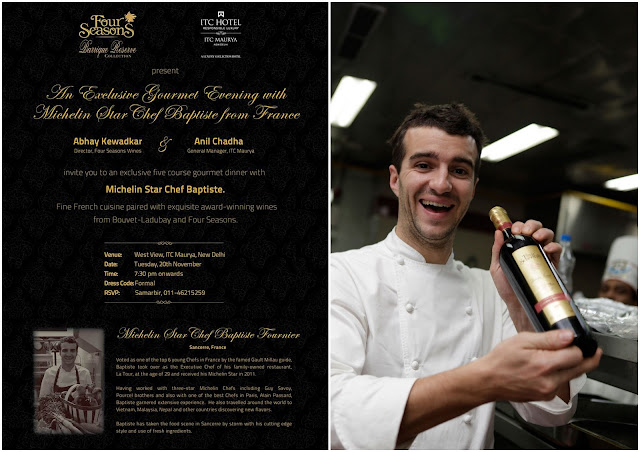 Voted as one of the top young Chefs in France by the famed Gault Millau guide, Baptiste took over as the executive Chef of his family owned restaurant La Tour, at the age of 29 and recieved his Michelin star in 2011. Having worked with 3 star Michelin Chefs including Guy Savoy, Pourcel brothers and also with one of the best Chefs in Paris Alain Passard, Baptiste garnered extensive experience. He also traveled around the world to Vietnam, Malayasia, Nepal and other countries discovering new flavors. Baptiste has taken the food scene by storm with his cutting edge style and use of fresh ingredients.

I was surprised to meet him when he himself walked to our table so simply and unpretentiously starting the conversation himself. Looking quite younger than his age and experience, he came across as an enthusiastic young chap who is passionate about his work. Very admirable. 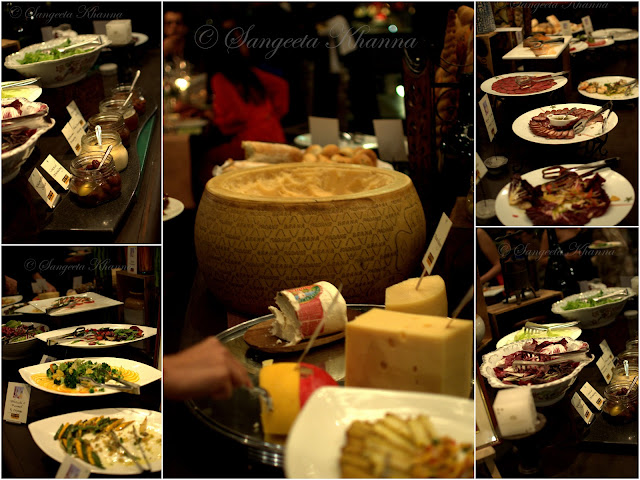 We had already nibbled on some starters (hors d'oeuvre) arranged on the roof top, chatting with Chef Saby who had just returned from his award winning trip to New York, this time The best Chef of India by Varli awards NYC. Delhi blogger friends Deeba Rajpal, Ruchira Hoon and Rekha Kakkar were good company for this formal (five course) sit down dinner. The Cheeses, the salads, Olives, preserves and an array of cold cuts was laid out on the huge table in the center of the hall as well. 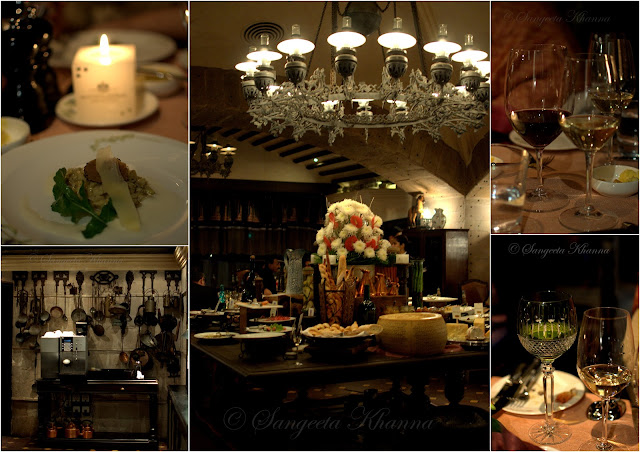 A pleasantly cool winter evening with Bouvet- Ladubay Saumer blanc, a bubbly white and a few plump green olives, some refreshing salads and cold cuts. The Mushroom and Asparagus salad was really nice, the right kind of bite in the sauteed mushrooms and crisp fresh Asparagus in a simple dressing that doesn't overpower. 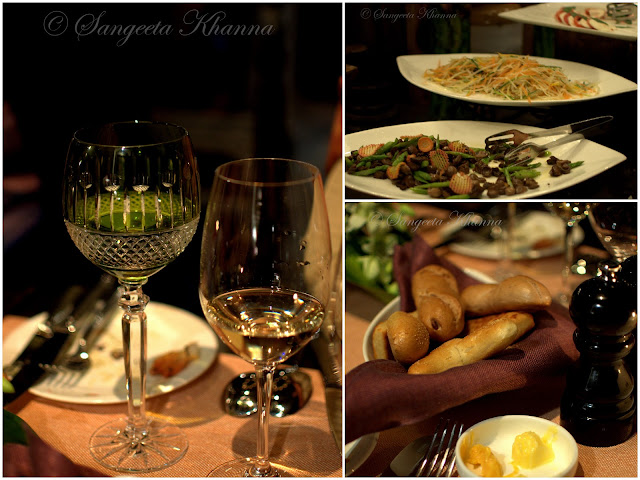 The first course was Fresh eggplant and crunchy vegetables with French Clams paired with Bouvet-Ladubay Saumer Blanc Val de Loire. Very nice Nouvelle cuisine presentation that made me glad as I love crunchy vegetables with anything. Perfectly fresh, raw Broccoli, cauliflower and Cherie belle (radish) slices that I gobbled up instantly. The eggplant was in a thick creamy soup consistency that I found itchy on my palate. Chewy clams I didn't relish much. Washed down by the wine that was refreshing. 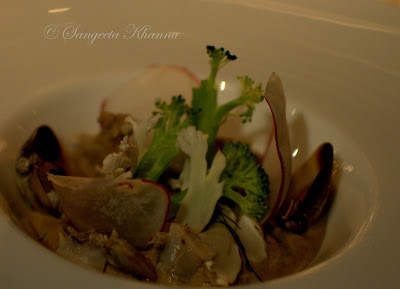 The second course came late and all of us on the table found ourselves nibbling on the breads, really nice fresh mini loaves and perfectly baked thin crunchy crackers. Breads and crackers were being refilled quickly. We had another round of the starters from the large table in the center, fresh figs, Shrimps, kalamata olives and cheese on my plate..some salad too... 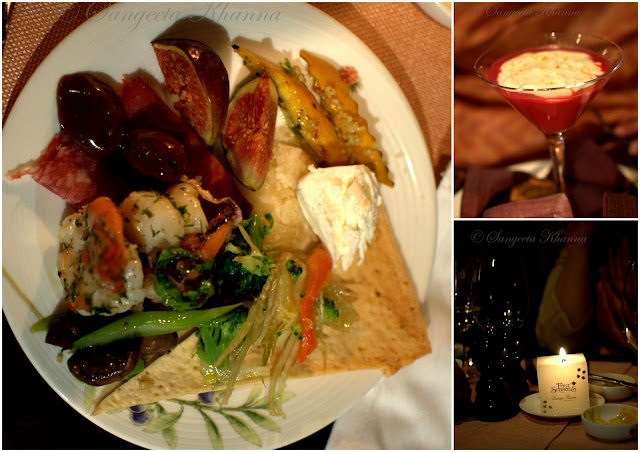 Wines were poured again as the second course arrived. It was Steamed fresh water perch on spinach with lime court bouillon. This was paired with Four Seasons Sauvignon Blanc. Steamed fish is one of my favorite foods and this was made perfectly.

The right kind of steamed fish, just as it should be. Spinach was flavorful and well done, the fish soft and succulent. It tasted like the Bhetki (also called as Asian sea bass  we love so much. It was so yummy I forgot clicking picture, this is what my plate looked like when I was almost done. I polished off everything on the plate, to the last speck of green. 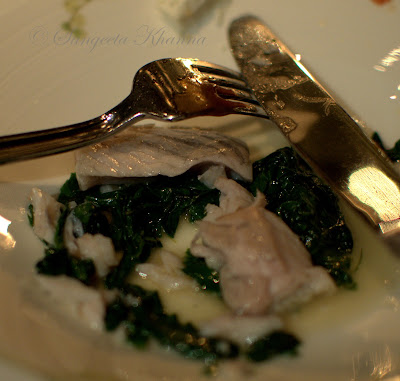 The next course was waited eagerly. The menu card said it was Artichoke risotto with black truffle and that made me want it. Seemed like a flavorful combination  and I dug into it with the buttery-cheesy sauce and liked how it hit my palate. The butter cheese combination is pleasant to the palate always. 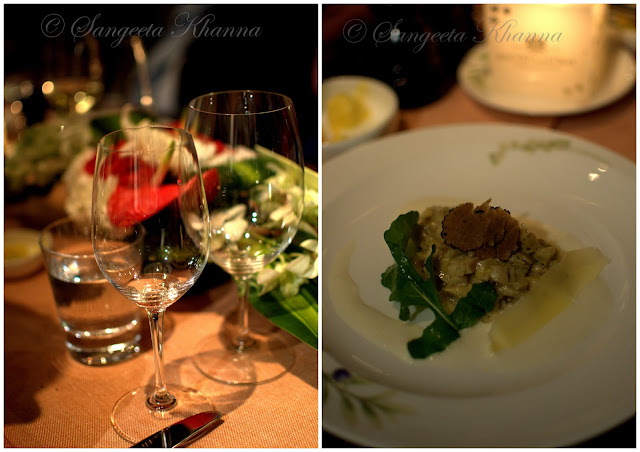 By the second spoonful I was disappointed by the absence of starch in it. There was no Arborio in the risotto, just finely chopped Artichoke that made quite a tart astringent risotto on it's own. Canned Artichokes cooked and reduced with wine would do that. Not my thing. Four Seasons Souvinon Blanc couldn't save it.

The next course, though delayed, was the best. It was a Roast saddle of lamb with zuchhini and asparagus. Paired with Four Seasons Barrique Reserve Canernet Sauvignon.

Perfectly juicy tender meat that comes from quick searing from all sides and then roasting till it is just done. Loved every element in this dish. 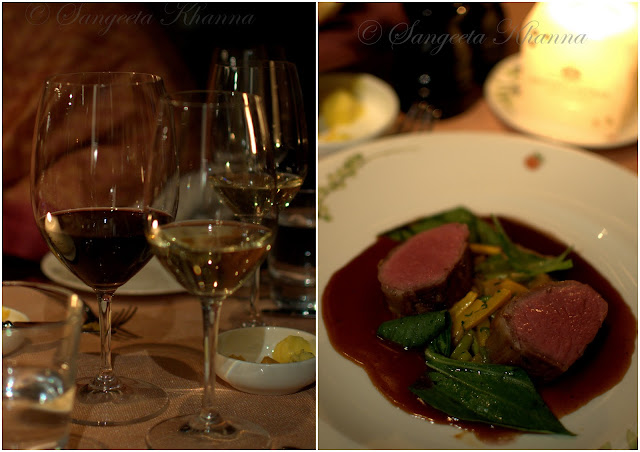 There was a long delay before the desserts came and a few guests left without waiting for them. Deeba, Rekha, Ruchira and myself got an opportunity to chat up, shifted our seats and got together, hence the wait for the dessert was not regretted. But they took a lot of time delivering the desserts on our tables.

It blew my mind when a 'dessert' came to the table. It was all my favorite flavors done to perfection. All textures melded together well. Pineapple ravioli with passion fruit puree and foamed cream. 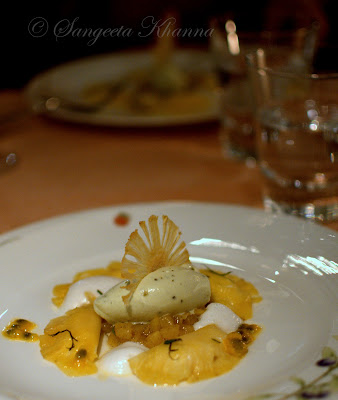 A scoop of basil sorbet and a thin slice of dehydrated pineapple slice. Every element was just so refreshing we all thought it should be a palette cleanser and not a dessert. It was not on the menu card too so we inquired and were told it was an additional dessert served. It was a huge dessert but all fruity, absolutely my type. Was demolished in about a minute, if not less.

The dessert mentioned on menu came a bit later, after the wines were poured. Bouvet Rose Excellence. 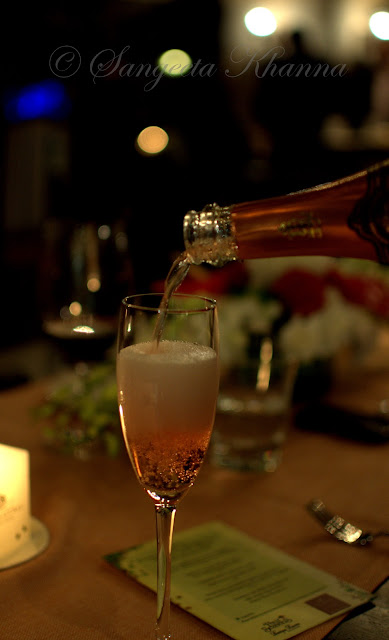 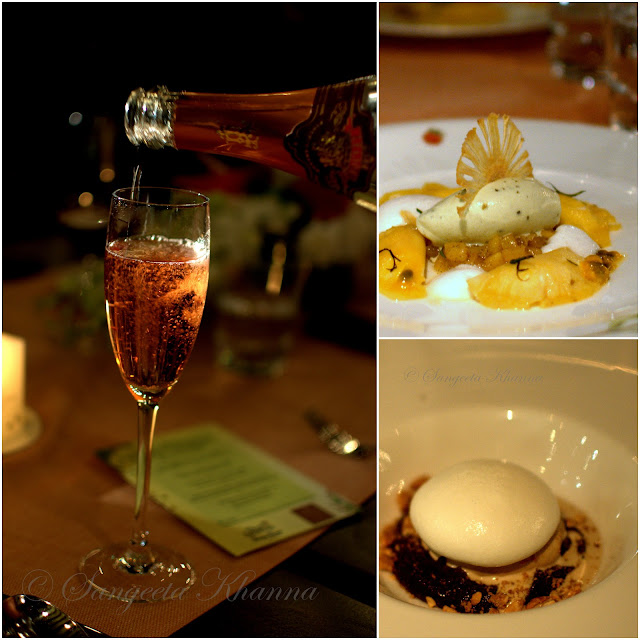 Next dessert on the menu arrived and it was another burst of flavors. Hazelnut and white chocolate, ice and cappuccino. Perfectly roasted crisp hazel nuts, a strong whiff of cappuccino and mild white chocolate. I don't even like white chocolate but this was on another level. Absolutely perfect pairing of flavors here.

These two desserts made us forget how late we were, we quickly got up and rushed outside.

ITC Maurya folks were sweet to gift us a pack of macarons too. French cuisine it was and Macarons fit the bill. Deeba whimpered about broken shells, the passionate and perfectionist baker she is and Ruchira talked about how she cried when her Macarons didn't bake well. I thanked god I didn't try them :-)

Sweet endings are always good, especially if those are sweet gestures. 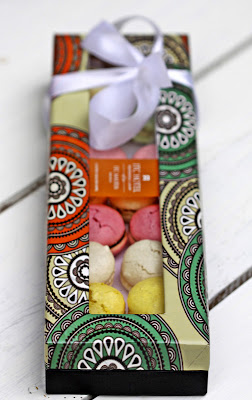 Thanks to Deeba for this picture. Couldn't resist sharing this with you all. Her pictures are just amazing and look like calenders. I am blessed to be with such talented people, and meet some more through this blog every day.