Grilled vegetables: potatoes with rosemary cream and eggplants with chives and olive oil.. 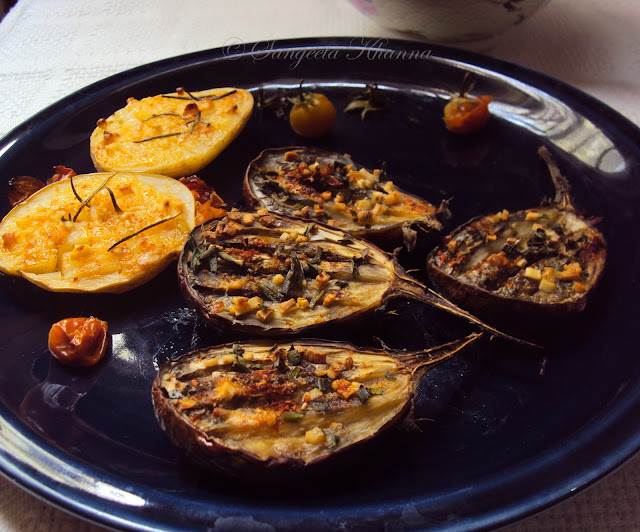 The herbs are just the top notes, base note being garlic. The earthy-smoky grilled vegetables that these potatoes and eggplant make. A convenient way to have more side dishes when the meals are looking dull and boring. Even the summer temperatures wouldn't make deter me from baking such beauties sometimes.

I visited the INA market with Sushmita Sarkar of My unfinished life just two days back and came home with a few fresh herbs that I don't have in my garden and a huge Dragon fruit. She asked for the recipe I was telling her with potatoes while commuting in the metro and I decided why not to make the grilled potatoes again instead of digging into my older folders for pictures. 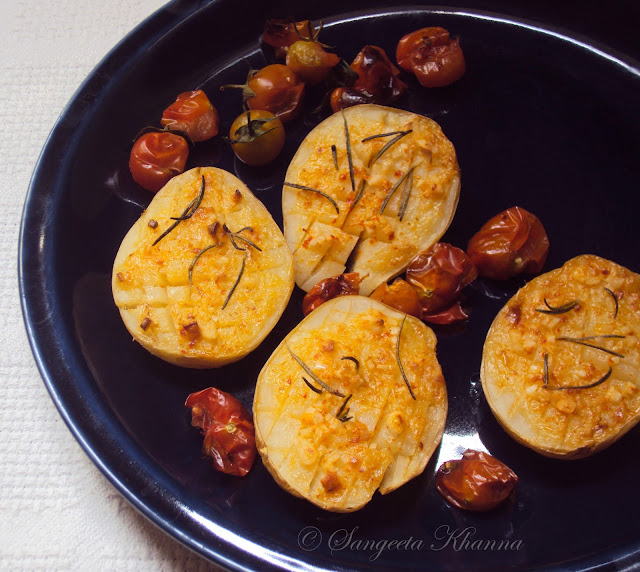 A few fresh eggplants form the garden also joined the potatoes in this grilling session. They both had different herbs to dab in, different fat medium too. Resulted in a nice aromatic flavors individual of their own although both of them occupied the same baking tray.

A few Cherie tomatoes joined them while baking and resulted in perfectly caremalised sweet and sour little bombs to burst in the mouth.

Here is the basket that was harvested in the morning... 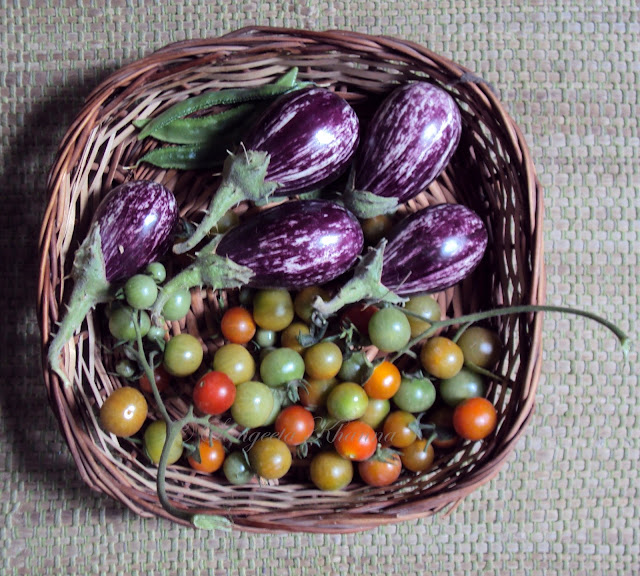 These eggplants with barbs on their crown have a nice buttery flesh when roasted or grilled. Cherie tomatoes as usual the best when fresh. Either in salads or grilled like this one. I am thinking of making some sun dried Cherie tomatoes after witnessing the enhanced taste in the grilled ones.

The recipe is simple, just a few things to keep in mind when cutting the potatoes and steaming them. Otherwise it is a very forgiving and adjustable recipe. Choose the herbs according to availability and the mood of the day and douse with whatever fat you like , butter, Extra virgin olive oil or just fresh plain cream. The resulting bake would be customised to your taste buds for the day :-) 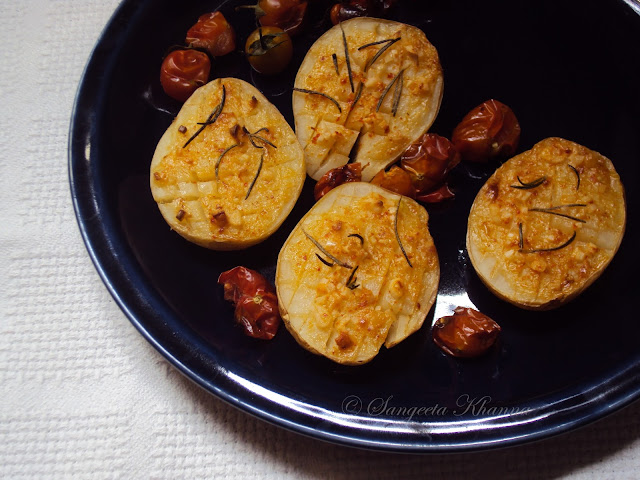 ingredients...
(2-4 servings as a side dish, respective ingredients for both potatoes and eggplants written under each of them, mixed quickly )

2 medium sized Japanese eggplants halved (retaining the crown and the stalk)
1 heaped tsp of finely chopped garlic
2-3 tsp of finely chopped chives (optional, as garlic has enough strong flavor)
2-3 pinches of red chilly powder
salt to taste
extra virgin olive oil to pour over the egg plants ( a small glug over each of them)

Cut the potatoes in halves and hold the halves in your left palm (if you are a right handed person or do otherwise), hold a paring knife with the right hand and cut lengthwise to make many furrows and then crosswise to make a grid pattern. Take care not to puncture the skin beneath.

Now steam or microwave these halves till these are half done. I microwaved them in a covered bowl, placing the potatoes cut side down, without added water for 2 minutes. When steaming in a steamer take care to just cook them lightly, otherwise they would fall apart. Now the potatoes are ready to be grilled.

Just when the potatoes were being microwaved i cut the eggplants too. Holding them just like the potatoes in one hand and making furrows in the cut halves. Just length wise in this case as the eggplant flesh gets quite soft and buttery and soaks the flavors easily. 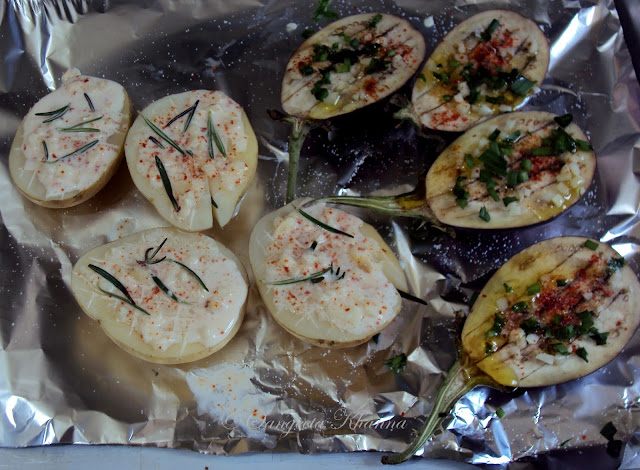 Arrange the cut halves of both the vegetables in a foil lined baking tray.

Mix all the ingredients for the potatoes seasoning, except the rosemary, and pour over the cut halves. Push and stick a few of the chopped garlic bits into the grid pattern in the potato halves and then slip in a few rosemary leaves too. Pushing a few of them inside the grid and a few just sprinkled on top.

For the eggplants, Just sprinkle everything on the open surface , pushing a few of the garlic and chive bits inside the furrows. Then pour some olive oil over it.

I took out the tray after 10 minutes and spread a few Cherie tomatoes too. The eggplants need some more time as they were not precooked, so I removed the baked potatoes after 20 minutes of baking and continued to grill the eggplant halves for 5 minutes more, placed on the higher rack.. 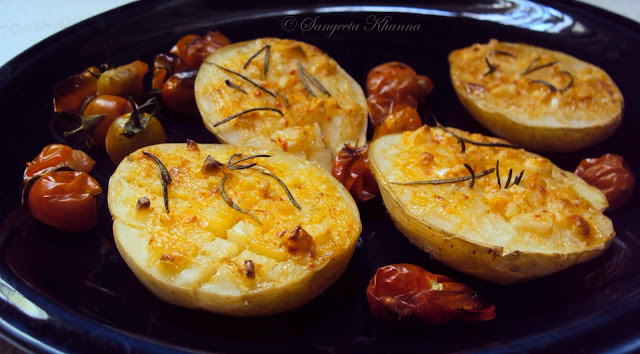 The favor of the tiny tomatoes got enhanced so much I am thinking of grilling them with every batch of baking I do. The plentiful harvest will be used in a great way for sure. 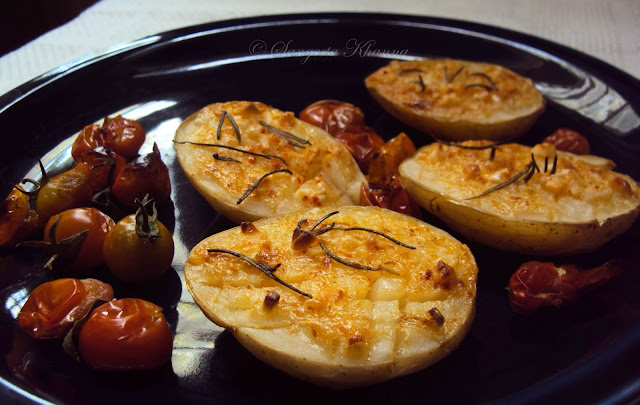 The fresh cream and garlic gives a nice background to the fresh rosemary to play as the potato flesh gets soft and oozing with flavors so rich.

Eggplants are more earthy than the effervescent potatoes here. The red chilly kick is quite potent in both of these , just the way I like it. You can always skip using red chilly powder or flakes and use black pepper powder instead.

With eggplants I use a variety of spicing depending on my mood and the main course dishes. More recipes of grilled/baked eggplants will be shared in future. Hoping to be regular on my blogs. 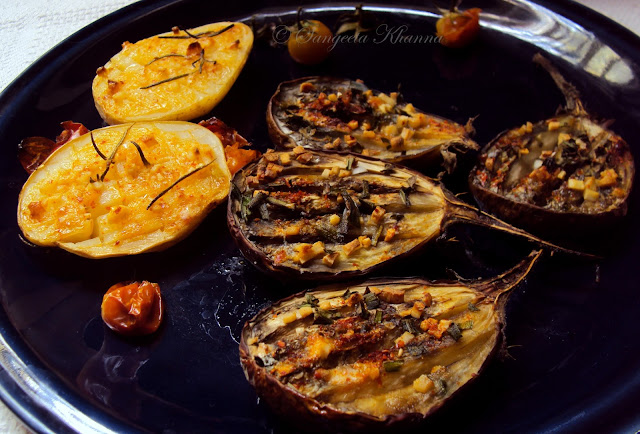 You can always add some cheese in the last 5 minutes of baking to get a cheesy baked potato with the same recipe. Keep in mind the baking time might differ with different ovens so be careful after 10 minutes and keep a watch on how browned you want your vegetables.

Do you have any favorite spicing for eggplants?

Would like to emphasise that you don't need to discard the peel of either the potatoes or eggplants after grilling them. The peels are edible and give a nice earthy flavor to the finished dish. Try that.
Labels: baked eggplants high fiber potatoes