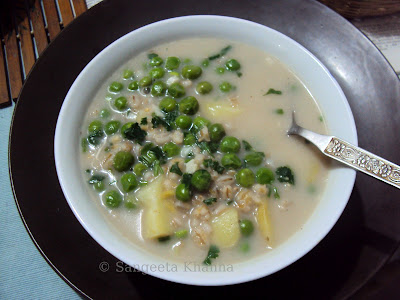 Sometimes I am in a fix when I want a warming bowl of soup for dinners and the husband wants something more filling. Almost all my dinner soups are quite filling but the husband is happy with a soup only when it is a tomato or sweet corn soup and is accompanied with a buttery garlic bread. I thought of cooking his favorite ingredients this time so he would like it as it is. Aloo and matar (potatoes and peas) are his all time favorite ingredients and I decided to bring them into a light soup. It was wonderful.

Whenever I use pearl barley for soup it is either boiled in a pressure cooker right before making the soup or use it ready from my fridge. There is some boiled pearl barley almost always in my fridge as I like it with my red lentil soups too. Luckily the husband likes the soft glutinous texture of boiled pearl barley. A blessing .

To boil pearl barley you just have to pick and wash them, then cook with double the volume of water and salt to taste. I do that in pressure cooker as said, but it can be cooked in an open pan too, the cooking time reduces if the pearl barley is soaked overnight. It will be useful to know that the soaked barley cooks really fast in microwave. Just 5 minutes for a cup of soaked pearl barley on high with just a tbsp of water. The texture of the barley cooked using these methods is different though, pressure cooker makes them burst and open up which I like in such a soup. 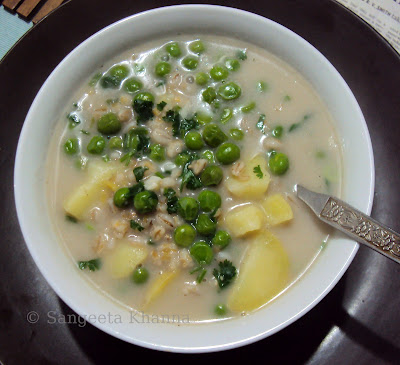 Place the cubes of potatoes and the peas in a pan with two cups of water, add salt to taste, the bay leaves and simmer covered till cooked. Add a little more water if you feel like. Add soaked pearl barley if using along with potatoes and peas so they cook simultaneously.

Add the pressure cooked pearl barley, pressure cooking can be done on the other stove when the potatoes and peas are boiling. and mixed when both get cooked.

Now add the coconut milk and freshly milled pepper. Simmer for about 5 minutes till the flavors blend well. 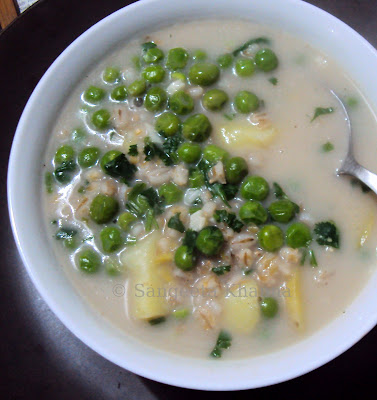 The soup comes out quite aromatic and is mildly spiced. The potatoes get mushy and absorb the flavors of coconut milk well. The fresh coriander leaves make it fresh and add another dimension of taste , being used in such good quantity....so do not reduce the quantity of coriander greens here..

A very comforting tasty dinner it makes. I made this soup after we had a tiff regarding his dislike for soups and he said after the dinner that we can have this soup some 3-4 day a week this winter. Green peas are so fresh was his reason. I know his reason was an almost sweetish taste of this soup which comes from coconut milk and really fresh green peas. Undisturbed by any chilly that I use in most soups of mine and the pungency of garlic that is such a favorite of mine. The truth is, I liked the soup too. Very much.