dhokli kadhi ... if you are craving for kadhi pakodi and are scared of frying... 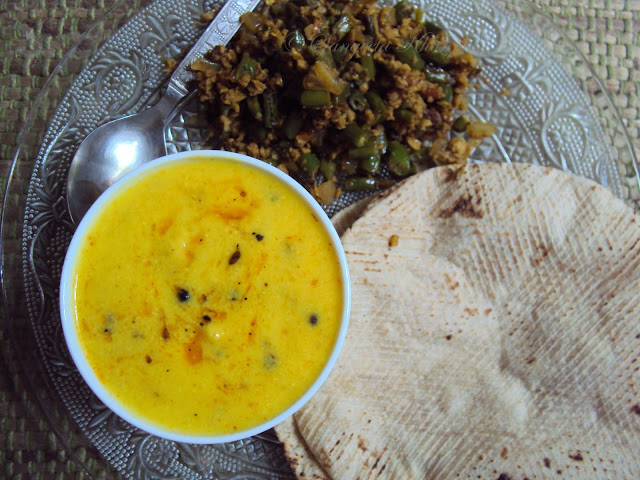 Make a kadhi with dhokli . Dhokli is a boiled dumpling made with chickpea flour for this kadhi and makes you free to enjoy kadhi more frequently.

Kadhi chawal is a comfort food , although i like it more with chapatis .The only concern of kadhi lovers is that the pakodi is invariably drunken on oil . Deep frying is a scary thought for many. This dhokli kadhi comes to the rescue when i don't want frying , i do enjoy my fried stuff occasionally though.

I make many variations of kadhi with steamed or microwave cooked pakode , sometimes using spinach or other vegetables too. But a basic kadhi is always something to look forward to , especially in a North Indian home. That basic flavor of kadhi comes from the ingredients used for  tadka (tempering) while the base of the kadhi is always chick pea flour and buttermilk. The fluffy juicy pakodis (chick pea flour fried fritters) floating into the kadhi make a delicious bite and that is the sinful part of the traditional kadhi.


If the pakodi is replaced with a steamed dumpling or a boiled one , the texture of dumpling changes a bit but the basic taste of the kadhi remains the same. So i make this dhokli kadhi very often to simulate kadhi pakodi... 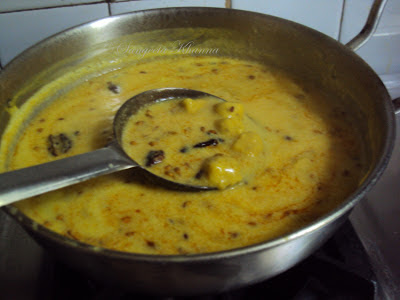 ingredients for the kadhi base...

Mix everything up and whip to make a smooth thin batter . Use more water to make the batter almost watery as it thickens as it cooks.

Pour the thin besan batter into a wide pan and let it boil on high heat while stirring constantly, turn the flame low as soon as the batter starts boiling , now it doesn't need constant stirring. Let it cook for about 5 minutes till you make the paste for dhokli and shape them . Read on...

Make a medium soft dough using some water with all the ingredients mixed together. Roll the dough in a log tube with oiled hands and cut the tube in 1 cm nuggets. It's almost like making gnocchi , using chick pea flour . Detailed instructions can be seen in a recipe of guar dhokli ki subzi i posted long back , now you know these dumplings can be used in vegetable curries also . 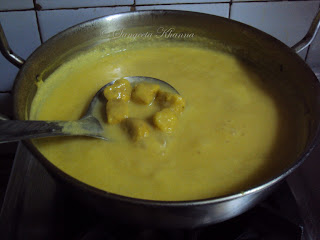 Sometimes i just spoon a little besan dough into the boiling kadhi making them smooth while dropping them in the pan. That is quicker and much more convenient as it doesn't involve your hands doing the rolling and then cutting.

Let the kadhi and dumplings boil on low flame till the kadhi gets thick and reduced to almost 4/5th of the original volume.... stirring the cooking kadhi softly all this while preventing the dumplings from getting smashed.

After cooking the kadhi it's time for a tadka (a spice tempering). Heat ghee in a tadka pan or a wide ladle(as i do) and add the ingredients one after the other in the same succession as they are listed here... 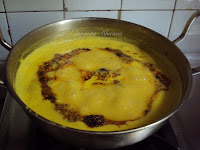 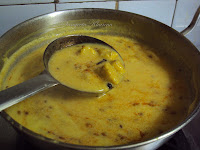 You should remove the tadka pan from flame once you have put in all the whole spices and then add the red chilly powder and immediately pour the contents into the cooked kadhi...let it get mixed up and serve hot...
The cooking kadhi pictures are quite old and the plate pictures are recent. This dhokli kadhi is a regular kadhi at my home and as i said in the last post i like it more with chapatis...

This time i made this beans and soy granules stir fry with tender ginger.. 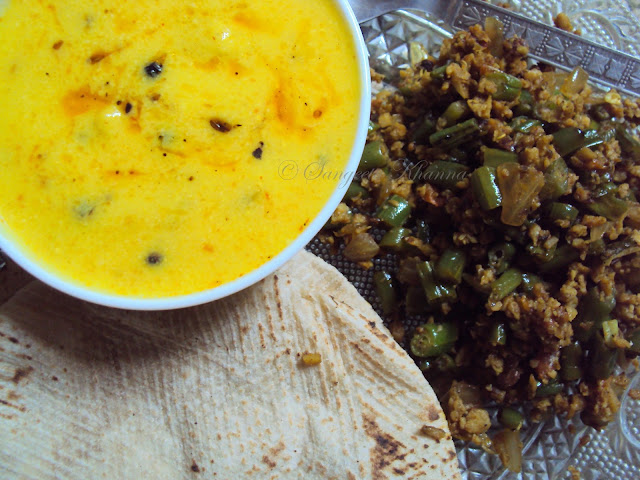 This recipe includes three ingredient lists , one for the kadhi , one for the dhokli and another for the tadka . But do not get intimidated by the long list and so many steps to follow....it's a simple recipe although it takes some time to cook but it will be worth it. The taste of a kadhi either with rice or chapati is something you would long to revive again and again.

No worries if it doesn't involve frying.....the flavors of this punjabi/UP kadhi lie in the thickened soup and not in the dumplings , although the dumplings add fun to the soupy bowl of contentment.....