unusual greens : wild purslane health benefits and recipe of cheela with it


Wild purslane or summer purslane is a common weed seen in the kitchen gardens or even in potted plants. It has a slightly sour taste, thin pink colored stems and tiny fleshy leaves. 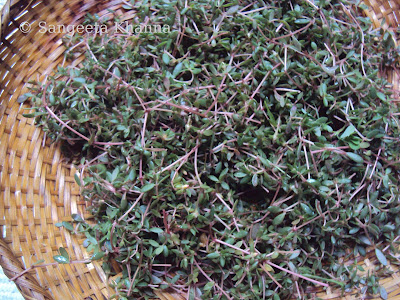 Yellow miniature flowers and miniature capsules filled with very tiny black seeds....it spreads like wild fire in the garden but doesn't affect the growth of any other plant as the roots are distributed on the surface soil only.... 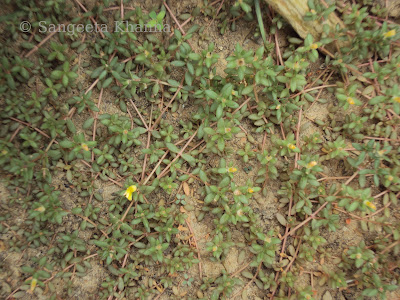 It is called 'nonia saag' in bengali, 'noni ka saag' or 'lunia saag'  in hindi, 'paruppu keerai' in tamil, 'koluppa' in malayalam and 'dudagorai' in kannada. Interestingly it a welcome weed in the gardens all over India due to it's nutritional properties...

High in omega-3-fatty acids, yes, you read it right. A weed rich in the most wanted nutrient worldwide. Purslane also has alpha-Tocopherol, Ascorbic acid, beta-carotene and Glutathione read it all here. Purslane is more nutritious than spinac , and you can get it free, and organic, as it grows by itself.

See how you can make a nice snack with this weed growing fresh in your garden. Unfortunately I have never seen this variety of purslane in the markets. The variety available in the markets is the large leaf variety, equally nutritious, but a bit different flavor. Both the varieties can be used for making these chilla or even fritters with the same batter. A nice healthy soup can also be made with this green, but I have not liked it much the way I have tried till now . I am working on a soup recipe with purslane and may be you will find a nice purslane soup on these pages some day. 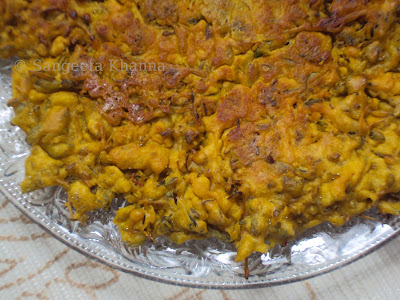 I never throw this weed away and always instruct the mali (gardener) not to touch it. I often harvest it myself and wash it properly as the roots are pulled off along with the plant and it has lots of dirt in it. Thoroughly washed purslane looks like the picture, the colours explain the high antioxidant content...

The most common thing I make with purslane would be this chilla or besan ka pooda. Some chick pea flour (besan) is added to the torn up leaves, otherwise it behaves like long entangled noodles, seasoned with ginger garlic and chilly, salt and turmeric, and a batter is made by adding little water.


The batter is spread over a hot greased griddle and shallow fried till brownish both the sides, well cooked and crisp on the edges. 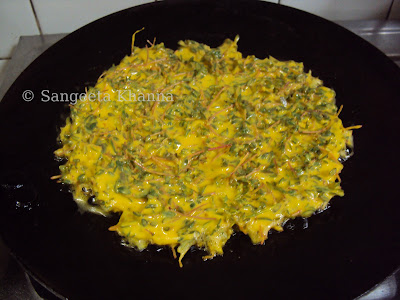 The margins become nice, crisp and lacy in appearance. 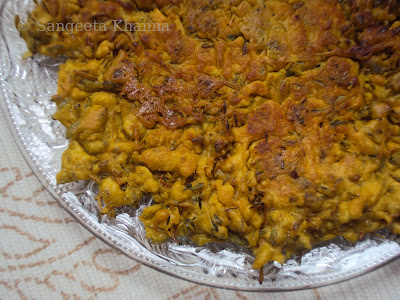 If you decide to make deep fried fritters with the batter, take care to make a dough like consistency. The fried fritters turn out to look like little bird nests as the strings of the purslane open up while frying making them really beautiful, but it soaks up a lot of oil and I prefer this shallow fried version of the pakode for us.

A green coriander chutney is all that is needed, and some adrak wali chai.

Produce fresh from garden makes me happy like anything.

This recipe is from the last summer and now is the season this unusual green will start springing up in my garden again. Till then another broad leaves variety is available in the markets right now, I made a nice dry stir fry with them and is coming on the next post.

You can add the wild purslane to kulfa wali kadhi sometimes as I do with these or even with the broad leaf kulfa saag, which is a cultivated purslane variety. Adding this to your everyday dal, to any curry that need tomatoes and even raita will be great if you have wild purslane handy.