healthy pao bhaji made from scratch | a pumpkin based bhaji and home baked pav, home made pav bhaji masala 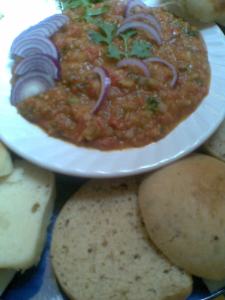 This pav bhaji is special because the pav is homemade, the bhaji masala is homemade and the bhaji is made with pumpkin. So it's pumpkin bhaji with a homemade pav, as it is made from scratch, the description is a bit long so jump to the recipe if you find the rumblings too much....:):)

Pav bhaji is something which comes in the category of comfort food for many of us, and like most of the popular foods which have survived the test of time and have been popular as fulfilling street food, aka, pizza, burgers, vada pav and litti chokha, this was also a poor man's food when it was not marketed in the way it is done now. You find pav bhaji masala mix so easily and the pav is always on the shelves of local bakeries. Not to forget every street eatery serving this as a filling meal which most people find suitable for 'anytime meal'.

There is only one problem with this yummy delight when you are enjoying it in the original form, it is soaked and drowned in butter. The pav is literally fried in butter and the bhaji has a generous topping of butter over it, so much so that when the plate arrives in front of you, it has a pool of butter over the bhaji which overflows and drenches the already drunk pav.

To tell you the truth, I am grown up loving that version of pav bhaji, but now as a sedentary lifestyle and an ageing body, I can't handle that much heaviness in my pav bhaji. 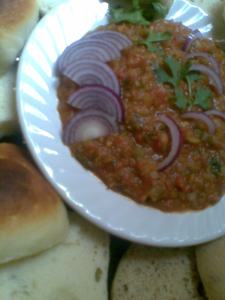 When I started making my low fat version, read butter less version of pav bhaji, I realised the buttery version is so overpowering with all things butter that the real taste of the bhaji and natural softness of bun is overlooked, at least in the north India eateries where I have had pav bhaji till date.

I know you wouldn't believe me, but once you eat this version, you'll stick to this whenever you make at home (will tell you more reasons to do so), and many people even don't realize it has no butter, until I tell them. The flavors are so rich that butter is so easily forgotten here.

Before proceeding further, I must say I love this with my whole wheat buns with flax seeds and sesame
and though I have been making many breads with all the healthy flours, I had never made a white bread, thinking it is so easily available in the market.

Actually I had started making all those healthy breads because they are not so easily available here and if so, are way too costly and always have some APF in it. This time I decided to bake a white bun for pav bhaji and was delighted to see that it was way better than the market ones and I decided never to buy even these white pav again....... 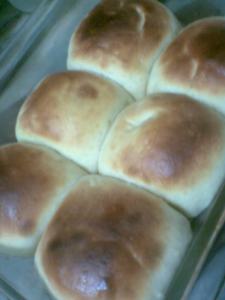 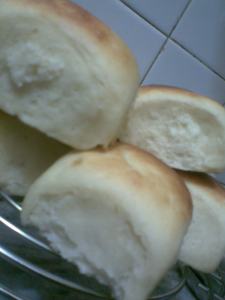 I made them using fresh yeast and a little bit of fresh home made malai for leavening (instead of butter) and the result was so encouraging that I did not even toast them to serve with the bhaji......it was yummy as it is... 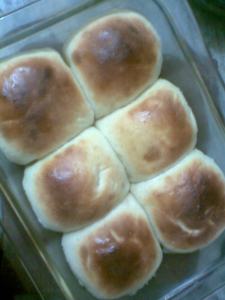 Procedure and ingredient for pav........

To make the buns I used a rectangular pyrex bowl and placed the dough rounds 2 inch apart and greased the sides of the rounds, after the doubling up they got closer and the edges touched each other to make perfect square buns........

Dough was made using all purpose flour (300 gm) with 1/2 tbsp of fresh yeast foamed or proofed in 50 ml of warm water and sugar solution.

1.5 tbsp of fresh homemade malai or cream and just enough warm milk to knead a soft and silky dough.

Rest the dough till it  doubles, punch and knead again to make it more soft and silky and let it rise again once.

When doubled, divide into 6 portions, make smooth balls and keep in the greased rectangular bowl as stated above, wait till balls double and bake in preheated oven till cooked.

I microwaved them for 4 minutes and then grilled them for 8 minutes. Yes you can bake breads in microwave ovens :-)

Now comes the special bhaji........
The bhaji is even more special. I make it with many combinations of veggies but this pumpkin bhaji is my favorite, as it is loaded with fiber and all the antioxidants, AND it is so yummy.

And I cook it in a different manner too. Instead of cooking the veggies together and mashing them later, I fine chop them in my chopper (processor) one by one and keep on adding to the kadai, the chopping and cooking goes on side by side........

Ingredients for the masala..

dry roast all these or  microwave on medium power for 2 minutes ....cool and grind in in dry grinding jar of your mixie....this is to be kept in an airtight container and this quantity can be used 3-4 times depending on the quantity you are making..........


Amchoor can be added in the bhaji if you feel that the tomatoes are not sour enough......
ghee 1 tbsp

Procedure for making the bhaji...

Process the ginger garlic and onion together in your chopper or processor OR make a coarse paste in mixie..

Heat ghee in a wide kadai (I used the kadai in which I had made ghee so this much ghee was already coating the kadai), throw in the ginger garlic and onion mix and fry till translucent....

Throw in 3 tbsp of the prepared pav bhaji masala into it and roast till fragrant on low heat...... 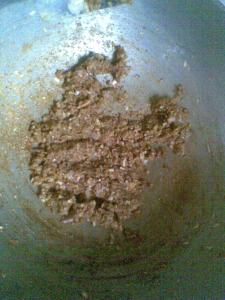 At this point you may add some additional red chilly powder as I did to get more heat into the bhaji ....or skip if you don't like it hot....it will be very fragrant till now......

Meanwhile process the cubed pumpkin pieces into a chopper and throw into the kadai when the masala gets fragrant.....add salt to taste, mix well and cook covered for 5 minutes or so.. 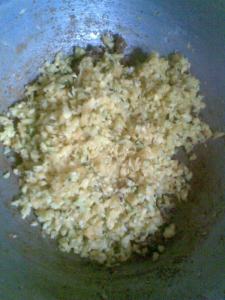 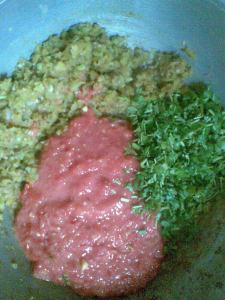 Mix well and cook covered foe another 5 minutes or so and then add the mashed boiled potatoes and keep stirring and cooking the mixture for a while. You will need to add some water to it as it gets drier after adding mashed potatoes. I added 400 ml of water..... 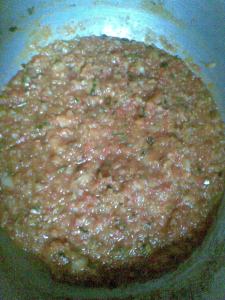 When it is cooked after about 5-6 minutes of cooking put off the flame and add chopped coriander leaves on top, mix lightly, cover and allow to sit for a while before serving........ 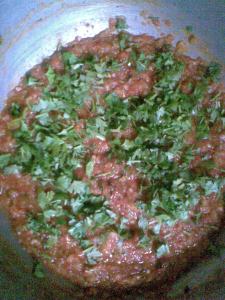 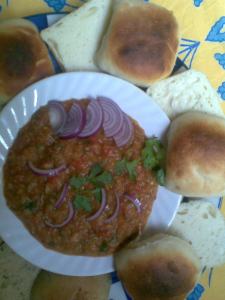 You are free to add butter but try it once without butter and I am sure you will dissociate butter with pav bhaji for ever :-)