healthy maah rajma | why rajma or kidney beans cause flatulence : reasons and solutions... 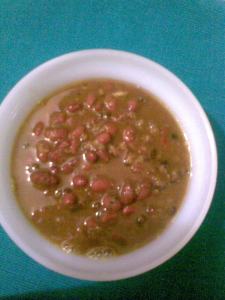 Rajma is the red kidney beans, as it is known to the western world, all the variants are available here, in north India. The pinto beans or mottled beans are called chitri wale rajma here and the bigger and smaller variants of red kidney beans are simply called the badi rajma n chhoti rajma.......white cannellini beans are called safed rajma and are considered almost tasteless as far as the north Indian masala cooking is concerned.........

Though most people use them to make rajma curries and salads according to their own preferences. I think the pinto or chitri wale rajma is good for salads and the red ones are better for curried rajma or makhni style cooking. The smaller variety is the one I like most for its smooth n creamy texture, it grows in Jammu and Kashmir, called Badarwahi rajma locally, and that's the one I have used here......

This is a typical punjabi recipe called maah rajma , maah ki dal is the black beans or urad ki daal and tastes very good in combination with rajma,  this combo is named maah rajma.....

It requires moderate amount of oil to cook and can easily be modified to low fat cooking...........this recipe saves my day many times when i am confused what to cook....rajma chawal is the easiest option........

Many people find rajma to be causing flatulence so there is a word of caution while cooking these beans, these should be soaked for several hours before cooking and the water in which the beans were soaked, should be discarded......then it should be boiled in fresh water for at least 10 minutes , as this is the minimum time to degrade a toxic compound found in it called
lectin phytohaemagglutinin, which otherwise causes stomach upset........pressure cooking the beans for 10-12 minutes is the best way to cook them, and more importantly kidney beans should never be sprouted for salads, and the same rule goes for urad dal or black beans too.

The recipe is simple, the beans are soaked overnight or for around 4-5 hours....and then pressure cook with water and salt till 2 whistles of the pressure cooker.

Then prepare masala for the curry, this recipe is for 3 cups of boiled rajma (soak 1 cup red beans n 1/4 cup of black beans and boil with 2 cups of water)

Heat oil in a pan and quickly pulse the onions in the grinder to make a rough paste n put in the hot oil......lower the heat and throw in a tsp of salt so that onion cooks faster.....meanwhile make a fine paste of ginger garlic in the grinder and add into the frying onions .......while stirring this, make a paste of the chopped tomatoes too........add all the powder masalas into the pan with a tbsp of water n keep stirring till fragrant.......add the tomatoes n cover n cook till tomatoes are cooked.......pour in the rajma mixture n chopped green coriander and simmer for about 10-15 minutes on low. Although it can be quickly boiled for a couple of minutes if you are in a hurry.